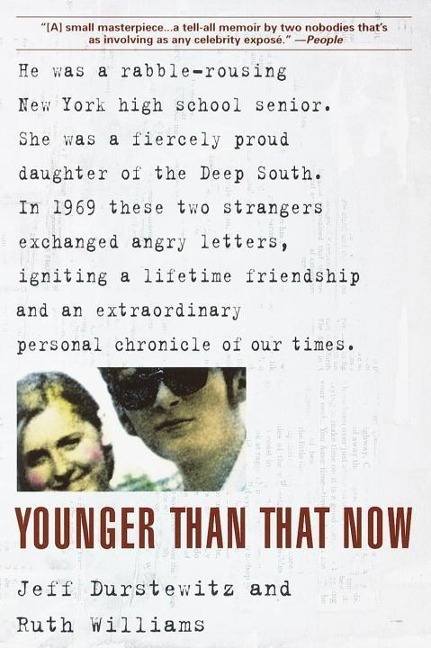 Younger Than That Now

A Shared Passage from the Sixties

He was a rabble-rousing New York high school senior.  She was a fiercely proud daughter of the Deep South.  In 1969 these two strangers exchanged angry letters, igniting a lifetime friendship and an extraordinary personal chronicle of our times.

She was a conservative Mississippi girl.  He was a self-styled firebrand from New York.  In 1969, in an America torn apart by differences, two very dissimilar teens put their hearts on paper and began a friendship that would span thirty years.  Now, in this collaborative memoir, they tell an unforgettable story that is a testament to who we were yesterday...  and who we are now.

It began when a group of bored Long Island high school newspaper reporters wrote, for a lark, an obnoxious note to Ruth Tuttle, the editor of a Deep South school paper.  The New York teens included a future documentary filmmaker, a concert violinist, and the founders of Ben & Jerry's ice cream--but in those days they were typical high school seniors, quick to imagine they knew all about a girl they'd never met.

The ringleader, Jeff Durstewitz, impulsively dropped the letter into a mailbox, never suspecting that within a few days he'd receive an electrifying response.  In the following flurry of letters, genteelly Southern Ruth and brash Jeff explored their feelings--sometimes heatedly--about God, race, sex, and life.  Within a month of receiving Ruth's first letter, Jeff was planning a Yankee invasion of Yazoo City, Mississippi.

Spring break brought a wild drive from New York to Yazoo City with his two friends in a psychedelic VW Bug, a "Heat of the Night" encounter between a cop and these three headstrong teens, and a culture clash in Ruth's living room that neither she nor her proper parents would ever forget.  It was a night that shattered stereotypes--and their hopes for a romance.

But it didn't derail the long-distance friendship that would sustain them both through thirty years of love affairs, heartbreaking disappointments, social change, divorce, and the loss of a cherished friend as they negotiated the passages from youth to middle age.  And with each move, the packet of precious letters traveled, too.

These letters form the heart of a wonderful memoir that captures not just the hopes of a generation and the soul of the South on the brink of inexorable change, but the experience of being young, bright, and passionate.

Younger Than That Now is as achingly expressive as Janis Joplin singing "Me and Bobby McGee," as revealing of youth's wild yearnings as a Woodstock documentary.  It is sharp, funny, and true, a mirror for a generation--both then and now.