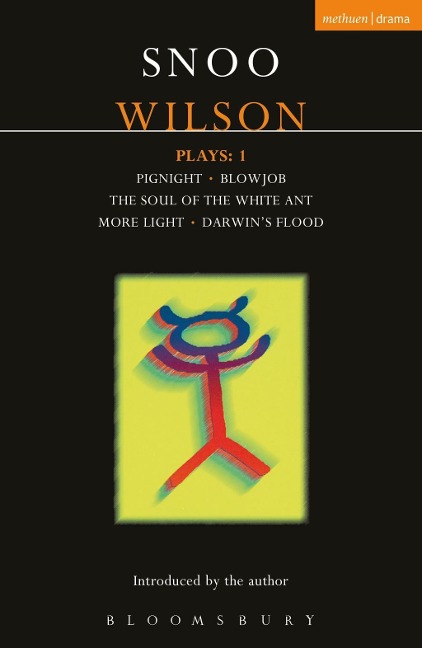 This first volume of Snoo Wilson's plays contains a mixture of his best early work from the 1970s and more recent efforts. Long considered to be a legend of Fringe theatre, Snoo Wilson's early plays had such absurd titles as Girl Mad as Pigs and Ella Daybellfesse's Machine. All of Wilson's plays search out strange psychological states in his characters and situations. Blowjob is a dark study in alienation and violence; in Pigsnight a Lincolnshire farm is taken by a sinister gang and turned into a machine for the organised butchering of animals. The Soul of the White Ant explores the weird world of the South African naturalist Eugene Marais whose ideas about a corporate soul lead to insanity. The volume also includes two plays with a Freudian perspective: More Light and Darwin's Flood. The volume includes an introduction by the author and notes by his various collaborators.
"Snoo Wilson tackles dark pockets of human endeavour with an original wit and a savage humour" (Financial Times).

SNOO WILSON was one of a handful of playwrights who reinvented British theatre in the 1970s and 80s. Together with Howard Brenton, David Hare and Tony Bicât he founded Portable Theatre Company, which presented his early work, including the still-performed Pignight. His other plays include The Pleasure Principe, The Glad Hand (Royal Court), The Soul of a White Ant, Vampire, The Number of the Beast, More Light, Darwin's Flood (Bush Theatre), The Beast (RSC), Orpheus in the Underworld (ENO), Bedbug, a musical (with Gary Kemp & Guy Pratt) based on Mayakovsky's 1929 satire (NT Connections 1995, 2016), and Reclining Nude with Black Stockings (Arcola Theatre). Following his sudden death in 2013, the many obituaries honouring both the man and the playwright confirmed that, at their exuberant, inventive and utterly original best, Snoo's plays deserve their place in the country's history of post-war playwrighting. "He encouraged audiences to go on a rollercoaster ride into the beyond, albeit with engaging and recognisable characters. It was not whimsy. He was a one-off, quite unlike any other dramatist." Dusty Hughes, Guardian.

An archive of Snoo's work will soon be available at the University of East Anglia. His plays are published by Methuen Drama and represented by Micheline Steinberg Associates info@steinplays.com