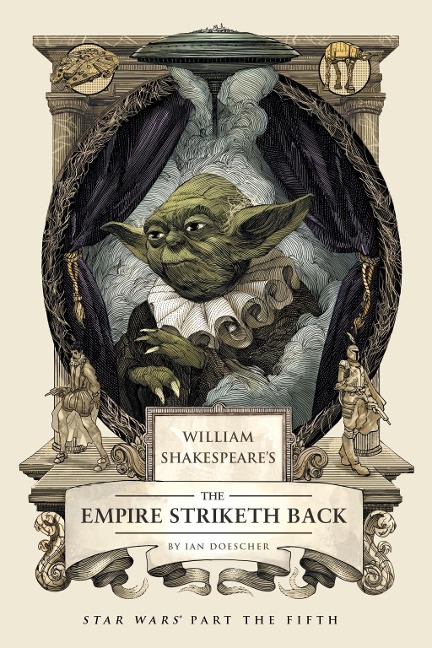 Experience the Star Wars saga reimagined as an Elizabethan drama penned by William Shakespeare himself, complete with authentic meter and verse, and theatrical monologues and dialogue by everyone from Yoda to a hungry wampa.

Many a fortnight have passed since the destruction of the Death Star. Young Luke Skywalker and his friends have taken refuge on the ice planet of Hoth, where the evil Darth Vader has hatched a cold-blooded plan to capture them. Only with the help of a little green Jedi Master-and a swaggering rascal named Lando Calrissian-can our heroes escape the Empire's wrath. And only then will Lord Vader learn how sharper than a tauntaun's tooth it is to have a Jedi child.

Authentic meter, stage directions, reimagined movie scenes and dialogue, and hidden Easter eggs throughout will entertain and impress fans of Star Wars and Shakespeare alike. Every scene and character from the film appears in the play, along with twenty woodcut-style illustrations that depict an Elizabethan version of the Star Wars galaxy.What light through Yoda's window breaks? Methinks you'll find out in the pages of The Empire Striketh Back!

Ian Doescher is the New York Times best-selling author of the William Shakespeare's Star Wars® series, the Pop Shakespeare series, and MacTrump. He has written for Marvel Comics and is a contributing author to the story collection Star Wars: From a Certain Point of View. He lives in Portland, Oregon, with his family. Visit him at IanDoescher.com.