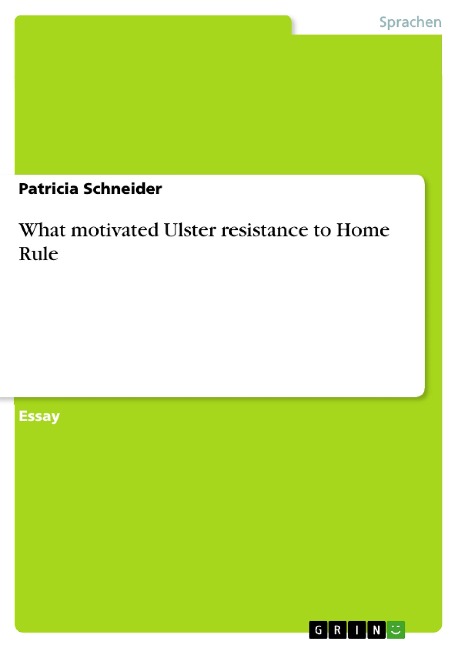 Essay aus dem Jahr 2010 im Fachbereich Didaktik - Englisch - Landeskunde, Note: 1,5, University of Ulster, Sprache: Deutsch, Abstract: When Irish nationalists wanted to introduce Home Rule, Ulster Unionists found a variety of reasons to prevent it. There were both moderate opponents to Home Rule as well as rather radical ones. Therefore, various arguments can be found, some of which are based on an objective examination of the Irish question, while others rely on subjective views and personal feelings. Among the arguments that were based on rather individual perceptions was the probably most salient argument: the religious objection to Home Rule.  Loyalty towards the Protestant British monarchy and family ties resulting from British or Scottish ancestors were further reasons to resist Home Rule.  As a result of the family ties within the Union, many Ulster Unionists felt that there were two nations in Ireland, which strengthened their opposition to the Nationalists' demands even more. Apart from these arguments which are based on the Unionists' individual perceptions, there were also objections which were based on a fear of the consequences for an independent Ireland both in terms of domestic matters and in terms of foreign policy. These rather objective arguments involve economic and financial objections to Home Rule as well as concerns about Ireland's military position.
This essay will first examine the objections that were based on Ulster Unionists personal fears then go on by observing the concerns about the consequences for a self-governed Ireland in terms of domestic matters and foreign policy and finally conclude by judging about the validity of the arguments.