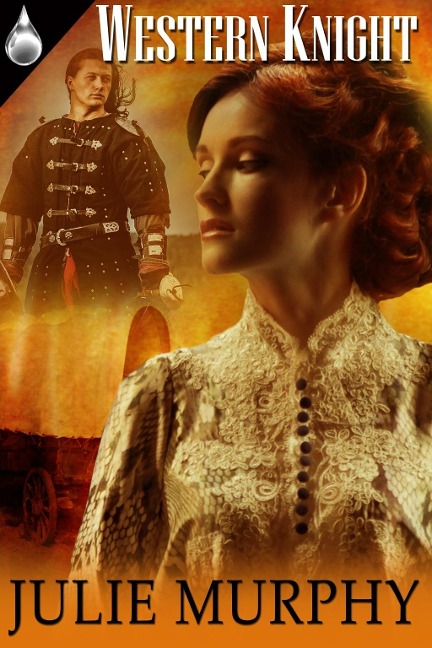 Her father always told her she'd meet her knight in shining armor some day. Maggie just didn't think he'd be an actual 14th century knight resurrected in the body of a thief and possible murderer. Transported from 1375 to 1875, Sir James MacArthur has to find a way to survive a world he little understands while trying to save Maggie, the damsel in distress that has won his heart. Julie Murphy blends history, romance, and a little bit of humor in her new romance novel, Western Knight.In 1875, in the woods bordering a horse farm in Kentucky, Magnolia &quote;Maggie&quote; Bathurst meets the knight her deceased father had promised her. Hell-bent and running from her stepfather, she trips over her cavalier's bullet-riddled body floating in a shallow ditch.At the same moment in 1375, the son of an English traitor to the crown, Sir James MacArthur, is trying to save his adopted sister from an arranged marriage to a man who beats women. In the escape, the Morrigan, the Gaelic goddess of battle, death, and resurrection, rearranges &quote;Mac's&quote; life.As all his days were faithful to his knight's pledge, the Morrigan decides Mac's life is worth redeeming, and so he is resurrected, but in the dead body of the spoiled, rich, criminal son of the Pig King of Cincinnati. Maggie knows the body as the notorious Randolph &quote;Randy&quote; McMillan, con man, thief, possible murderer, ladies' man.For Mac, this new body doesn't have a mass of angry burn scars in place of a groin. For the first time since the age of five, he discovers he has a &quote;flagship&quote; that works. And he wants to float it with Maggie.Content Notes: Spicy, Western, Historical, Paranormal, Romantic Comedy, Action, Adventure, Goddesses, Magic, Time Travel

The Rules of Engagement