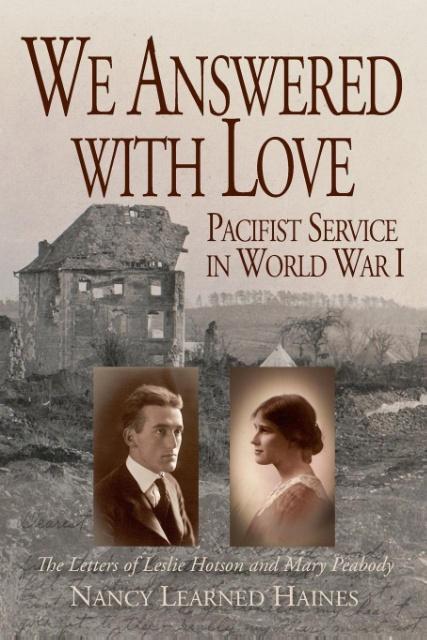 We Answered With Love

Pacifist Service in World War I

In America, 1918 was a time of idealism and duty. Young men joined the military, eager to fight the German menace. Women raised money to support the troops and worked in munition factories. Patriotism was at a fevered pitch.

But not everyone believed in the rightness of war. Leslie Hotson's conscience led him to go to France with the American Friends Service Committee to repair the wounds of war. Mary Peabody worked to change conditions at home as a radical socialist and anti-war activist. Both hoped that their love of mankind would lead them to living out their highest ideals.

Their correspondence is a compelling story of two college students engaged in the sacrifice and adventure of participating in a noble cause. They share a first-hand commentary on events in France and America, as experienced by thoughtful young people opposed to the war.  Leslie writes of the devastation in France, the work of the Quakers in rebuilding destroyed neighborhoods, and the persecution of conscientious objectors, including his brother, who were drafted but refused to fight. Mary's letters tell of the Harvard campus being taken over by the Navy, the Spanish influenza epidemic which ravaged the country, suffrage and radical activities, and the disturbing rise of political conservatism after the Armistice. They also talk about poetry, literature, friends, and their day-to-day activities. The letters are a delightful, romantic story of friendship turning to love.

Nancy Learned Haines is an engineer by education and a historian by avocation. For twenty-five years, she was an antiquarian bookseller with a specialty in rare books and materials by and about Quakers. She and her husband have given numerous talks about the history of Quakers using original source materials. They have a major collection of rare books, pamphlets, manuscripts, and materials about the Society of Friends and have curated exhibitions in conjunction with the rare books libraries of Wellesley College, Bryant University, and the University of Rhode Island.