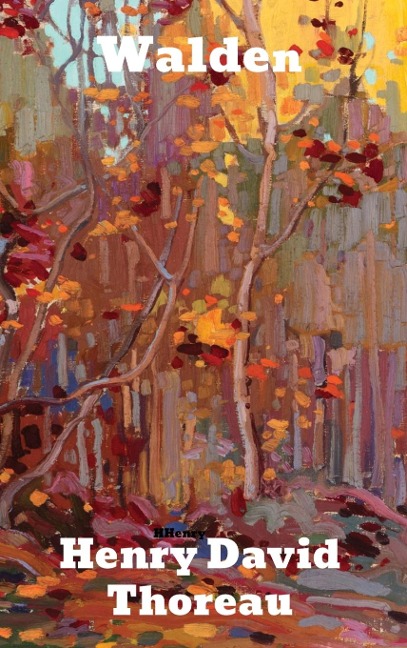 Walden (first published as Walden; or, Life in the Woods) is a book by noted transcendentalist Henry David Thoreau. The text is a reflection upon simple living in natural surroundings. The work is part personal declaration of independence, social experiment, voyage of spiritual discovery, satire, and-to some degree-a manual for self-reliance. First published in 1854, Walden details Thoreau's experiences over the course of two years, two months, and two days in a cabin he built near Walden Pond, amidst woodland owned by his friend and mentor Ralph Waldo Emerson, near Concord, Massachusetts. Thoreau used this time to write his first book, A Week on the Concord and Merrimack Rivers. The experience later inspired Walden, in which Thoreau compresses the time into a single calendar year and uses passages of four seasons to symbolize human development.By submersing himself in nature, Thoreau hoped to gain a more objective understanding of society through personal introspection. Simple living and self-sufficiency were Thoreau's other goals, and the whole project was inspired by transcendentalist philosophy, a central theme of the American Romantic Period.Thoreau makes precise scientific observations of nature, as well as metaphorical and poetic use of natural phenomenon. He identifies many plants and animals by both their popular and scientific names, records in detail the color and clarity of different bodies of water, precisely dates and describes the freezing and thawing of the pond, and recounts his experiments to measure the depth and shape of the bottom of the supposedly "bottomless" Walden Pond.I went to the woods because I wished to live deliberately, to front only the essential facts of life, and see if I could not learn what it had to teach, and not, when I came to die, discover that I had not lived. I did not wish to live what was not life, living is so dear; nor did I wish to practice resignation, unless it was quite necessary.

Henry David Thoreau (July 12, 1817 - May 6, 1862) was an American essayist, poet, philosopher, abolitionist, naturalist, tax resister, development critic, surveyor, yogi,[3] and historian. A leading transcendentalist,[4] Thoreau is best known for his book Walden, a reflection upon simple living in natural surroundings, and his essay "Civil Disobedience" (originally published as "Resistance to Civil Government"), an argument for disobedience to an unjust state.
Thoreau's books, articles, essays, journals, and poetry amount to more than 20 volumes. Among his lasting contributions are his writings on natural history and philosophy, in which he anticipated the methods and findings of ecology and environmental history, two sources of modern-day environmentalism. His literary style interweaves close observation of nature, personal experience, pointed rhetoric, symbolic meanings, and historical lore, while displaying a poetic sensibility, philosophical austerity, and Yankee attention to practical detail.[5] He was also deeply interested in the idea of survival in the face of hostile elements, historical change, and natural decay; at the same time he advocated abandoning waste and illusion in order to discover life's true essential needs.
He was a lifelong abolitionist, delivering lectures that attacked the Fugitive Slave Law while praising the writings of Wendell Phillips and defending the abolitionist John Brown. Thoreau's philosophy of civil disobedience later influenced the political thoughts and actions of such notable figures as Leo Tolstoy, Mahatma Gandhi, and Martin Luther King Jr.
Thoreau is sometimes referred to as an anarchist.[7][8] Though "Civil Disobedience" seems to call for improving rather than abolishing government-"I ask for, not at once no government, but at once a better government"[9]-the direction of this improvement contrarily points toward anarchism: "'That government is best which governs not at all;' and when men are prepared for it, that will be the kind of government which they will have."