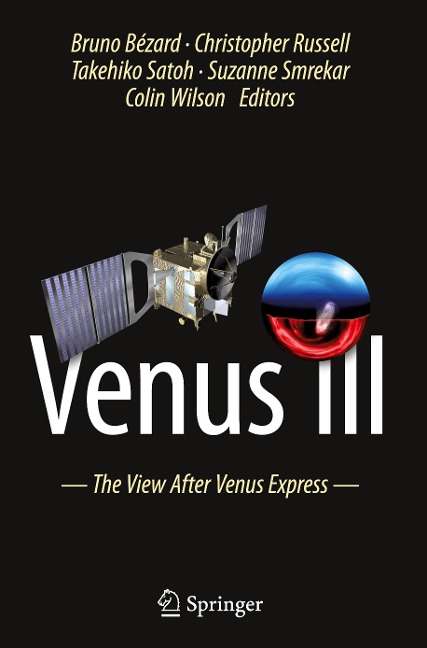 The View After Venus Express

The Venus Express spacecraft, which was launched in November 2005 and ceased activity in December 2014, has brought about a new wealth of data on Venus's atmosphere, surface, and space environment. Following the completion of this landmark mission, an overview of the current state of scientific understanding of Venus has been assembled into a single collection.
The ten papers in this book, written by an international team of specialists, are the products of this effort. They review our knowledge of Venus's interior structure, surface composition, and atmosphere in terms of thermal structure, dynamics, composition, chemistry, clouds, aeronomy, and interaction with the solar wind. Additionally, they identify the questions and measurements that remain open for study in ongoing and future research and exploration efforts. The resulting volume is primarily intended for students and researchers of planetary science.
This book is a follow-up to the pioneering book Venus, published in 1983, and its successor volume Venus II, published in 1997, stood at their respective times as the most authoritative single-volume works available on the planet.
Originally published in Space Science Reviews in the Topical Collection "Venus III"
Taschenbuch 01/2021
(0) - Geben Sie die erste Bewertung ab
kostenloser Standardversand in DE gewöhnlich ca. 4-5 Werktage (Print on Demand)

Bruno Bézard is a scientist from CNRS working at the Observatoire de Paris, where he investigates the atmospheres of planets, moons and exoplanets. He has authored or co-authored nearly 180 peer-reviewed scientific papers, including 29 on Venus. He has been a member of instrument teams including the Cassini Composite Infrared Spectrometer, the Huygens Descent Imager/Spectral Radiometer and the Visible and Infrared Thermal Imaging Spectrometer aboard Venus Express. In 2018, he was awarded the David Bates medal of the European Geosciences Union.

Chris Russell is a Professor of Geophysics and Space Physics at the University of California, Los Angeles. He has flown instruments on the Pioneer Venus Orbiter, and other terrestrial, planetary, and interplanetary missions. He recently served as a co-investigator on the Venus Express orbiter. He was presented the AGU Macelwane award, the AGU Fleming medal as well as the COSPAR Science Prize. He has authored or co-authored over 1800 papers in journals and books, and authored two text books. His H-index is currently 108.
Takehiko Satoh was born in Tokyo, Japan in 1962. He currently works at the Department of Solar System Sciences at the Institute of Space and Astronautical Science, JAXA. Satoh received his PhD in Physics from the Science University of Tokyo in 1992. Satoh is the Principle Investigator for the IR2 (2-mm) camera onboard Venus Climate Orbiter, and the project Scientist for the Venus Climate Orbiter. His research interests include planetary atmospheres, magnetospheres, and surfaces.
Suzanne E. Smrekar is an American astronomer and Deputy Principal Investigator for the Mars InSight lander. Smrekar obtained her B.S. degree in geophysics and mathematics from Brown University in 1984, and her doctorate in geophysics from Southern Methodist University in 1990. She was a postdoctoral researcher at MIT before joining the Jet Propulsion Laboratory (JPL) in 1992.

Colin Wilson is a Senior Research Fellow at the University of Oxford's Department of Physics, where his research focusses on the atmospheres of terrestrial planets. He supplied meteorological sensors for Beagle 2 and Schiaparelli Mars landers; has been a co-Investigator for orbiter instruments including the Visible and Infrared Thermal Imaging Spectrometer aboard Venus Express, and the Atmospheric Chemistry Suite onboard the ExoMars Trace Gas Orbiter; and develops proposals for future missions to Venus, Mars and Titan.

1. Editorial: Topical Collection on Venus.- 2. Venus: The Atmosphere, Climate, Surface, Interior and Near-Space Environment of an Earth-Like Planet.- 3. Venus Interior Structure and Dynamics.- 4. Venus Surface Composition Constrained by Observation and Experiment.- 5. Venus Atmospheric Thermal Structure and Radiative Balance.- 6. The Atmospheric Dynamics of Venus.- 7. Composition and Chemistry of the Neutral Atmosphere of Venus.- 8. Clouds and Hazes of Venus.- 9. Aeronomy of the Venus Upper Atmosphere.- 10. Solar Wind Interaction and Impact on the Venus Atmosphere.- 11. Future of Venus Research and Exploration.