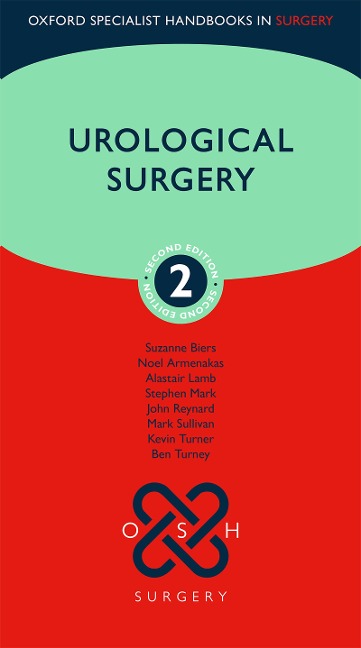 The Oxford Specialist Handbook of Urological Surgery returns fully updated for a second edition to guide the reader step-by-step through all types of urological operations. Including both background information on key urological problems and alternative surgical options, this Handbook is designed to guide the trainee through all aspects of urological surgery, from gaining clear and accurate consent to examining risks and complications of procedures.

With each chapter written by subspecialty experts, this Handbook is packed with tips and tricks that offer practical and theatre-based advice gleaned over years of theatre experience to aid the reader. It also includes helpful pointers on aspects of surgery including patient positioning, indications and contraindications, types of incisions, and choice of ideal instrument, alongside aftercare and follow-up for the patient.

Fully updated in accordance with new European guidelines and NICE clinical guidance, with extra topics on technological developments including robotic assisted surgery and a brand new chapter on female urology and incontinence, the Oxford Specialist Handbook of Urological Surgery is an essential resource for all urological trainees and junior doctors.

Suzanne Biers graduated from St. George's Hospital in London with a distinction in surgery. She trained in Cambridge, Oxford, and Wessex, completing a postgraduate research degree in functional bladder problems at the Oxford University Department of Pharmacology, and achieved the John Blandy Prize for her work. After completing a female urology fellowship in Leicester, she became a consultant Urological Surgeon at Addenbrooke's Hospital in Cambridge, sub-specialising
in female and male lower urinary tract symptoms, incontinence, and reconstruction. She is lead for the Urology Masters Degree in Cambridge, and director of the Cambridge Emergency Urology Course, Emergency Surgical Skills Workshops, and Reconstructive Techniques in Urology Course. Suzanne remains
active in teaching, publication and research.

Noel Armenakas is a board-certified urologist and is nationally recognized as an expert in lower urinary tract reconstruction. He served as the Lenox Hill Hospital Urology Residency Program Director from 2009-2013. For the past 20 years, he has taught the widely acclaimed post-graduate Trauma and Reconstruction course at the annual American Urological Association meeting each spring.

Stephen Mark completed urological training in 1992 and undertook a fellowship in reconstructive and urodynamic urology with George Webster at Duke University Medical Centre, Durham, USA, and a paediatric fellowship with David Frank in Bristol Children's Hospital in Bristol, UK, for one year each. His surgical interests are those of reconstructive and paediatric urology.

John Reynard is a consultant urological surgeon based in Oxford. He also provides a specialist neurourological service for patients with spinal cord injury at the National Spinal Injuries Centre at Stoke Mandeville Hospital. He has published widely in the field of neurourology. He teaches medical students from the University of Oxford Clinical Medical on a variety of topics and has written several books on urological subjects for both medical students and trainee surgeons.

Mark Sullivan is a Consultant Urological Surgeon with research interests in the area of kidney cancer, laparoscopy and robotic surgery. He took up his appointment as a Consultant Urologist in Oxford in April 2003.
His practice is based at the Churchill Hospital, Oxford and the Horton General Hospital, Banbury. He received his medical training from University College and Middlesex Hospital, and then his surgical training in London and Cambridge, before undertaking two years' full time research, culminating in a Doctor of Medicine degree in 1999. He is the Clinical Lead for Renal Surgery in Oxford, sits on the NCRI Renal Studies Group and SPED, the NCRI Screening Committee.

Professor Kevin Turner is a Consultant Urological Surgeon in Bournemouth and a Visiting Professor at Bournemouth University. He trained in Cambridge, Oxford, Edinburgh and Melbourne. His principal interests are in urological cancer and particularly resectional surgery for pelvic / renal malignancy including laparoscopic and robotic surgery. He is committed to training and developing young surgeons: he is a former faculty member for the Training the Trainers course (Royal College of Surgeons of
England), he is a current FRCS Urology oral examiner, and is an educational and clinical supervisor to urological trainees. He is co-editor of the Oxford Handbook of Urological Surgery (OUP), has published several book chapters and numerous original research papers, abstracts, and review articles.
His research on angiogenesis in renal cancer was awarded a Royal College of Surgeons Research Fellowship and the European Association of Urology Thesis Award.

Ben Turney trained in Cambridge and Oxford and undertook research for both an MSc and DPhil in Oxford.  He also obtained a diploma in university teaching in 2006 from the University of Oxford. Ben is the Bernard Senior Clinical Researcher in Urology & an Honorary Consultant Urological Surgeon employed by both the University of Oxford and the Oxford University Hospitals NHS Trust.
He is also an elected member of the BAUS Section of Endourology Committee, managing partner of Oxford Urology Associates, and a co-founder and director of UroScreen Ltd, which provides urologists and their patients with StoneScreen technology.