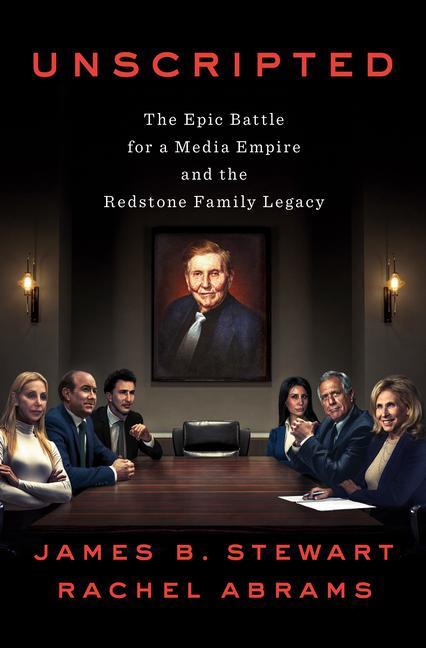 Unscripted: The Epic Battle for a Media Empire and the Redstone Family Legacy

The shocking inside story of the struggle for power and control at Paramount, the multibillion-dollar entertainment empire controlled by the Redstone family, and the dysfunction, misconduct, and deceit that threatened the future of the company, from the Pulitzer Prize-winning journalists who first broke the news

In 2016, the fate of Paramount-the entertainment conglomerate that includes Viacom, CBS, and Simon & Schuster-hung precariously in the balance. Its founder and head, ninety-three-year-old Sumner M. Redstone, was facing a very public lawsuit brought by a former romantic companion, Manuela Herzer-a lawsuit that placed Sumner's deteriorating health and questionable judgment under a harsh light.

As one of the last in a long line of all-powerful media moguls, Sumner had been a relentlessly demanding boss, and an even more demanding father. When his daughter, Shari, took control of her father's business, she faced the hostility of boards and management who for years had heard Sumner disparage his daughter. Les Moonves, the popular CEO of CBS, felt particularly threatened. Scheming with his allies on the board, Moonves worked to strip Shari of power. But while he publicly battled Shari, news began to leak that Moonves had been involved in multiple instances of sexual misconduct, and he began working behind the scenes to try to make the stories disappear.

Unscripted is an explosive and unvarnished look at the usually secret inner workings of two public companies, their boards of directors, and a wealthy family in the throes of seismic changes. Through the microcosm of this company, whose once victorious business model of cable fees and ticket sales is crumbling under the assault of technological advances, and whose workplace is undergoing radical change in the wake of #MeToo, Black Lives Matter, and a distaste for the old guard, New York Times reporters James B. Stewart and Rachel Abrams lay bare the battle for power at any price-and the carnage that ensued.

James B. Stewart is the author of Deep State, Tangled Webs, Heart of a Soldier, Blind Eye, Blood Sport, and the blockbuster Den of Thieves. He is currently a columnist for The New York Times and a professor at Columbia Journalism School. In 1988, he won a Pulitzer Prize for his reporting on the stock market crash and insider trading.