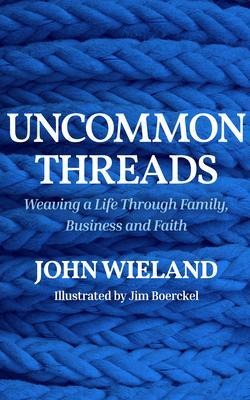 John Wieland is the first to admit his success is baffling.

When an average Joe turns a bankrupt company into a 30-branch business that earns over $300 million in revenue and gives 10 percent of the company profits to ministries across the world, Wieland is the first to ask: how did this happen?

His conclusion: business, family and faith affect each other in ways that few realize and together bring about success.

Unlike many books that discuss faith, Wieland never preaches perfection. It's his honesty about his own struggles-between worship and human instinct, between sacrifice and indulgence, between sharing his love of God with others and appreciating people right where they are-that makes Uncommon Threads so unique. In it, Wieland uses the lens of his own life to tackle important topics such as hypocrisy, racism, parenting, religion and even what happens when you take someone into your home only to later find out that he shot a lady in the head and left her for dead.

In the end, Wieland shows that family, business and faith are inescapably woven together and that the lessons you learn growing up can provide the values that serve you well throughout the rest of your life.

His is the story of a life well-spent. The combination of self-deprecating tales of his foibles and touching moments of inspiration received from both his successes and failures makes Uncommon Threads a must-read.