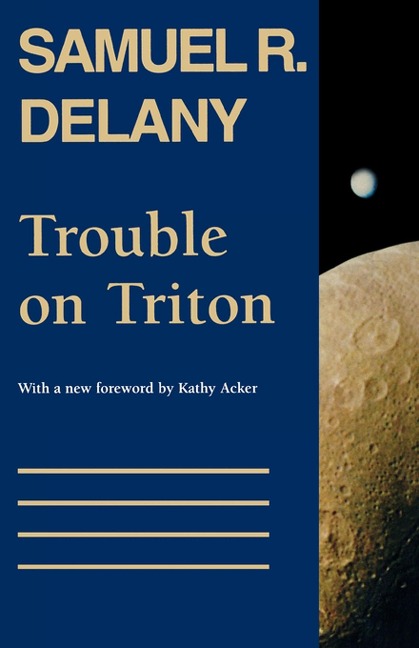 In this novel by a Nebula Award-winning author, a man looks for love in a society where you can be anyone you want, on a moon at war with Earth.

In a story as exciting as any science fiction adventure written, Samuel R. Delany's 1976 SF novel, originally published as Triton, takes us on a tour of a utopian society at war with . . . our own Earth! High wit in this future comedy of manners allows Delany to question gender roles and sexual expectations at a level that, twenty years after it was written, still make it a coruscating portrait of "the happily reasonable man," Bron Helstrom-an immigrant to the embattled world of Triton, whose troubles become more and more complex, till there is nothing left for him to do but become a woman. Against a background of high adventure, this minuet of a novel dances from the farthest limits of the solar system to Earth's own Outer Mongolia. Alternately funny and moving, it is a wide-ranging tale in which character after character turns out not to be what he-or she-seems.

"Delany's most controlled, and therefore his most successful, experiment to date. . . . Triton is a novel of manners--those of a rich and complex society in which the avowed highest good is the free expression of each individual's personality." -Gerald Jonas, New York Times Book Review

"Delany has been the cutting edge of the SF revolution for more than ten years. . . . [He] may turn out to be as important a writer as Pynchon." -Mother Jones

"This is classic Delany that maintains a cutting edge of sheer platinum. Delany sets his interrogation of the myth and politics of a central culture within an infinitely richer galaxy of interwoven margins. The dazzle always illuminates: the novel offers vision-altering thrills on the order of paradigm shifts or sex at its most rapturously cataclysmic." -Earl Jackson, Jr., author of Fantastic Living: The Speculative Autobiographies of Samuel R. Delany

"An excellent novel. The author has created an innovative and fascinating culture." -Orca