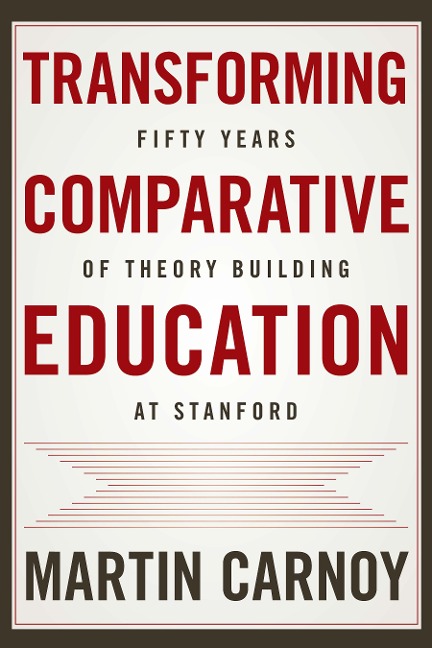 Over the past fifty years, new theoretical approaches to comparative and international education have transformed it as an academic field. We know that fields of research are often shaped by "collectives" of researchers and students converging at auspicious times throughout history. Part institutional memoir and part intellectual history, Transforming Comparative Education takes the Stanford "collective" as a framework for discussing major trends and contributions to the field from the early 1960s to the present day, and beyond.

Carnoy draws on interviews with researchers at Stanford to present the genesis of their key theoretical findings in their own words. Moving through them chronologically, Carnoy situates each work within its historical context, and argues that comparative education is strongly influenced by its economic and political environment. Ultimately, he discusses the potential influence of feminist theory, organizational theory, impact evaluation, world society theory, and state theory on comparative work in the future, and the political and economic changes that might inspire new directions in the field.

Contents and Abstracts
1The Strands of Comparative and International Education:
chapter abstract

This chapter reviews the emergence of new ways of studying education comparatively and internationally in the 1950s and 1960s. It argues that in the immediate post-World War II period reconstruction in Europe and Asia and the advent of the Cold War put comparative education research front and center in potentially influencing the political and economic course of nations. As the role played by the field grew in ideological importance through the 1950s and 1960s, an intense discussion developed around methodology and the direction research should take. The chapter shows how three different yet overlapping strands of research and teaching emerged: introducing social scientific methods into comparative education; applying academic research to educational developmental activism, and comparing educational systems through measurement of student achievement and other "outcomes" of schooling. These three strands continue to dominate the field to this day, largely in the same structural forms as in the 1960s.

This chapter describes the turbulent history of Stanford's comparative and international education program over fifty years, since its founding in the mid-1960s, and how the program managed to survive and flourish despite its continuously precarious position in the School of Education. The chapter argues that this survival resulted from a synergy between three core components. First, the program trained its students using an interdisciplinary social science approach to educational issues. Second, it placed major emphasis on training students in critically and innovatively applying methods from the social sciences. Third, the program became a leader in the field through new theoretical approaches to comparative education developed by Stanford faculty. These new approaches had worldwide influence on comparative and international education research and the training of students. The approaches had immediate influence on the students in the program, who then went on to populate the faculties of comparative education programs worldwide.

This chapter discusses the important contribution of human capital theory to comparative and international education beginning in the early 1960s. It recounts the author's personal involvement as a student at the University of Chicago in the beginning of the theory's evolution, and how, through early studies in Mexico and Kenya, he developed an alternative approach to human capital as a tool to study education systems comparatively. This alternative approach is described through an early work of the author's, questioning many of the underlying assumptions of the theory. The chapter analyzes the pros and cons of human capital theory and its potential for and limitations in understanding both the expansion of education and especially individuals' decisions as to how much and what kind of education to take.

This chapter presents the major contribution to comparative education theory made by Alex Inkeles and David Smith in the early 1970s. Inkeles headed a six-country study on "modernity," which he and Smith defined as a mode of individual functioning-a set of dispositions to act in certain ways that were related to notions of progress and higher economic productivity. The main hypothesis of the modernity project was that these "skills" or worldviews or attitudes that shape behavior were learned indirectly through the social structures in which people live and work rather than being specifically taught in a formal sense. The chapter describes this research, published in 1974 as the book Becoming Modern, goes into detail about its underlying theoretical bases and results, and analyzes the reasons for the resistance the study encountered at the time in the social science and comparative education communities.

This chapter discusses the critical analyses of education that emerged from applying neo-Marxist class theories and existentialist critiques of society to comparative education in the 1960s and early 1970s. The chapter reviews how these analyses emanated from theories of dependency and psychological "colonization," and how they challenged earlier social science approaches to comparative education. It focuses on the author's writings of the early 1970s, which argued that the inequalities observed in education systems in both developed and developing countries were not mainly the result of "inefficiencies" of educational bureaucracies but built directly into the class and racial reproductive nature of the educational systems themselves. As the chapter spells out, this suggests that educational inequalities largely reflected the inherently unequal nature of capital societies, the degree of inequality of economic and power relations in these societies, and the role that education was assigned in helping reproduce such inequalities.

This chapter discusses the intellectual foundations of world society theory, developed by John Meyer and his colleagues, and their evolution and spreading influence on comparative education. It details how this theory rejected two other explanations of the rise of mass schooling: functionalist theories that saw it as a response to the imperative of filling specific social functions-incorporating youth into an industrial form of production requiring specific human skills and behavior-and theories that explained the rise in terms of its crucial role in reproducing class relations of production in a broader economic-political functionalism. In contrast, world society theory argued that the nation-state is an ideological project abstracted from any single economic system or the interests of any social group. The expansion of mass schooling, in turn, is the expression of a "modern" nation-state's drive for legitimation within a wider world environment that defines progress and modernity.

7The 1980s: The Politics of Education: Legitimation, Reform, and Knowledge
chapter abstract

This chapter describes the evolution of Hans Weiler's contributions to state theory and their application to comparative education analyses. It focuses first on Weiler's theory of compensatory legitimation, which posits that the state has a substantial legitimacy deficit and attempts to compensate for this deficit through policies that serve as strategies to legitimate the state. Foremost among these are educational policies that, Weiler argues, are used to give the impression of change and increased participation, but are, in fact, substitutes for actual reforms. The chapter then analyzes Weiler's second contribution to comparative education theory: his analysis of knowledge and its role in higher education. This concept centers on the relationship between knowledge and power. He argues that knowledge and power are connected by a relationship of what he calls reciprocal legitimation-that is, knowledge legitimates power, and conversely, power legitimates knowledge.

8The 1980s: The State and Comparative Education
chapter abstract

This chapter discusses two additional state theories, one applied to US education and the other developed to explain educational expansion in socialist developing countries. The first argued that the state is contested terrain and that change takes place in education and other sites of the state through a process of contradiction and political conflict over the shape and direction of education. These changes in education have repercussions for civil society, including for the workplace. The argument in the second theory was that the state, not the production system, is the main source of the dynamic of postcapitalist socialist societies, and it is politics, more than the relations of production, that drives their social development. The theory also claimed that understanding how and why these states restructured their educational systems can-through comparison and contrast-provide insights into how and why educational systems in traditional dependent capitalist countries maintain inequality.

9The 1990s: Comparative Education and the Impact of Globalization
chapter abstract

This chapter discusses theories of comparative education that emerged at Stanford in response to economic globalization in the 1980s and 1990s.Their main thrust was that, paradoxically, as the world economy globalizes, the nation-state continues as the political structure where educational policy plays out. Yet that state comes under increased pressure from global forces at two levels. First, those impinging on the underlying politics of the nation-state, such as regional divisions exacerbated by uneven economic development in the global economy and the increasing global use of information technology to define nation-state politics. Second, by global organizations explicitly attempting to shift policy making away from nation-states to international agencies. Unlike the world society theory's overarching ideological conception of the nation-state-one that converges nations' thinking about education and human rights-these organizations represent their attempt to apply uniform explicit educational policies globally to all nation-states.

This chapter discusses important new analyses of education that estimate various school interventions' causal effects on student outcomes. Such estimates allow researchers to describe relations between school inputs and student characteristics or how educational systems are designed (e.g., teacher incentives) in one country and in different country contexts. To illustrate, the chapter focuses on three impact evaluations recently completed in China by Stanford faculty. One uses a strong identification strategy treatments' impact on student outcomes and two are randomized trials. The first study estimates the impact of vocational education on the outcomes of computing majors. The second uses an experimental design to test the effect on teacher practice and student mathematics achievement of a two-part teacher professional development program in one province. The third conducted a randomized trial to estimate the effects of several different designs of teacher pay incentives on teacher teaching strategies and student outcomes.

This chapter discusses the pros and cons of the most influential "movement" in comparative education in the past two decades-large-scale international tests. The chapter describes the arc of international testing from its early days in the 1960s, as an effort to obtain more data to compare developed country educational systems, to the present day of massive multiyear testing on a world scale, "league table" comparisons of average national student performance, and drawing educational policy "lessons" from the educational practices of high-scoring countries. The chapter analyzes the advantages for comparative education analyses of the great increase in data about educational systems internationally and the many flaws in using international test scores to draw inferences about whether and why some countries' educational systems are "good" or "bad" and about the relationship between student test scores and future national economic and social development.

12Where Is Theory Headed in International and Comparative Education?
chapter abstract

This chapter speculates about future directions for comparative education theory. The chapter begins with potentially new contributions from impact evaluation, international testing, state theory, and world society theory as the influence of globalization and information technology on political economy and ideological norms (including individual identity) intensifies. The chapter concludes by discussing how other theoretical conceptions of educational issues could impact comparative education over the next generation. One of these is feminist theory, with its potential to alter assumptions concerning the definition of educational goals and the evaluation of educational processes. A second is learning theory, and its potential for changing the way tests are used to gauge whether students are "learning more" in one country than in another. Learning theory may also find new ways to better understand what education systems in different societies actually do rather than comparing educational systems' "effectiveness" based on one or two specific outcomes.