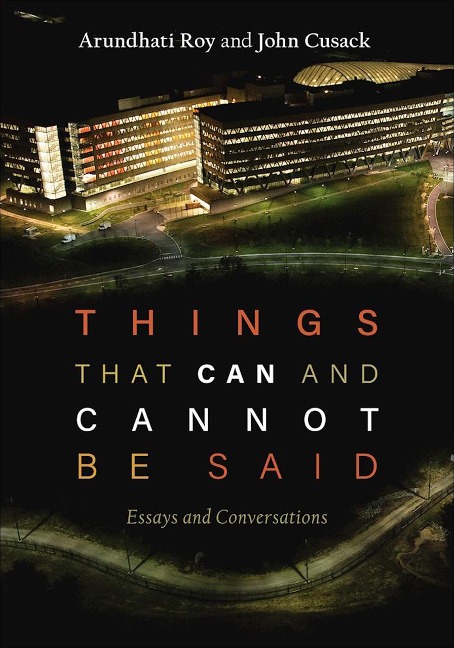 Things That Can and Cannot Be Said

An activist and an actor reflect on Edward Snowden and the surveillance state in this collection that "reads like a whistleblower's travel diary" (Disorient).

In late 2014, Arundhati Roy, John Cusack, and Daniel Ellsberg traveled to Moscow to meet with NSA whistleblower Edward Snowden. The result was a series of essays and dialogues in which Roy and Cusack reflect on their conversations with Snowden. In these provocative and penetrating discussions, Roy and Cusack discuss the nature of the state, empire, and surveillance in an era of perpetual war, the meaning of flags and patriotism, the role of foundations and NGOs in limiting dissent, and the ways in which capital -but not people-can freely cross borders.

"Things That Can and Cannot Be Said is not a book with solutions, nor even a comprehensive framing of the problem. Its charm and potential lies in its disarming conversational approach, offering insights-in-passing; ideas and thoughts to spark further conversations and just maybe inspire other acts of moral courage. While the book channels a palpable sense of rage-rage at imperialism, at the surveillance state, at 'Washington's ability to destroy countries and its inability to win a war'-it concludes on the topic of love." -PopMatters

"It asks questions-a lot of them. It connects dots from Kashmir to Palestine to Vietnam to Virginia-leaving no one spared from scrutiny--not even themselves, as Arundhati asserts." -Disorient

"The freewheeling conversations between all the participants will bring up many Eureka moments for a lot of readers. Insights that can only be gained if you are researching these topics in exhausting detail." -Firstpost

Arundhati Roy studied architecture in New Delhi, where she now lives. She is the author of the novel The God of Small Things, for which she received the 1997 Booker Prize. The novel has been translated into forty languages worldwide. She has written several non-fiction books, including Field Notes on Democracy: Listening to Grasshoppers and Capitalism: A Ghost Story, published by Haymarket Books.
John Cusack is a writer, filmmaker, actor, and a board member of the Freedom of the Press Foundation. He has written the screenplays for the movies Grosse Point Blank, High Fidelity, and War, Inc., with Mark Leyner and Jeremy Pikser, among many others. His writing has appeared widely, including the Guardian, Truthout, and Outlook India.