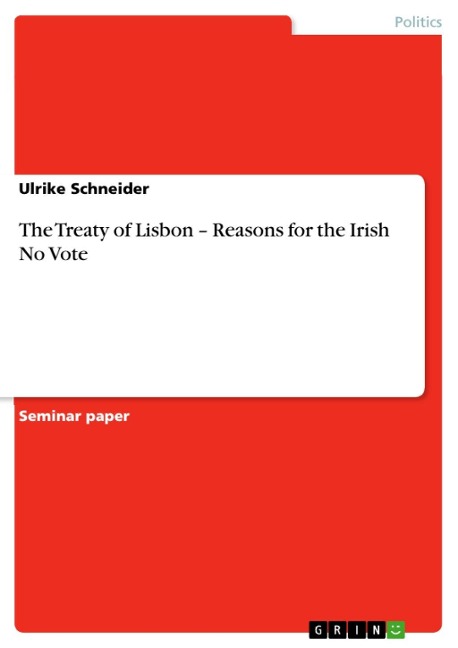 The Treaty of Lisbon - Reasons for the Irish No Vote

Seminar paper from the year 2009 in the subject Politics - International Politics - Topic: European Union, grade: 1,7, University of Hamburg, language: English, abstract: On June 12, 2.8 million Irish voters got the chance to move the European Union one step further by voting in favour of the Treaty of Lisbon. Ireland was the only European country that allowed its citizens to express their opinion on the Treaty by means of a referendum.  Suspense was created by the fact that a non-ratification of only one country was enough to stop the whole treaty. Just a little more than half of the Irish people went to the polls so that eventually 860,000 no votes were enough to obtain a majority. Less than a million people were able stop a treaty which was supposed to make the EU and its institutions, regulations and law finally suitable for 27 member states and 492 million Europeans in a constantly changing world, facing new problems like terrorism and climate change. All member states of the EU had agreed on the Treaty of Lisbon and ratified it  as they thought the EU urgently needed a modernisation of the European Institutions. The Treaty of Nice, which forms the present basis of the European Union and goes back to the fifties, and the Treaties of Rome cannot meet this challenge anymore.
Ireland is regarded as one of the "winners" of the European Union. For years, it experienced sustained economic growth, full employment  and a rising GDP . Then what could be the reason the majority of the Irish people voted against the Treaty of Lisbon or did not even go to the polls, instead of voting in favour of a treaty that would have improved the strength of the EU to which Ireland owes so much?
More and more, the European Union struggles with the increasing problem that it has to defend its acceptance to European citizens. People turn away from the Community because they have got the feeling that they are ill-informed and their interests are less represented on the European then on the national level. There are huge divergences in the ideas about the EU, the politicians and the citizens have which has lead to disenchantment with politics. This paper claims that the Irish people did not reject the Treaty of Lisbon itself but were simply not able to assess the advantages and disadvantages of the Treaty of Lisbon because of missing independent information.