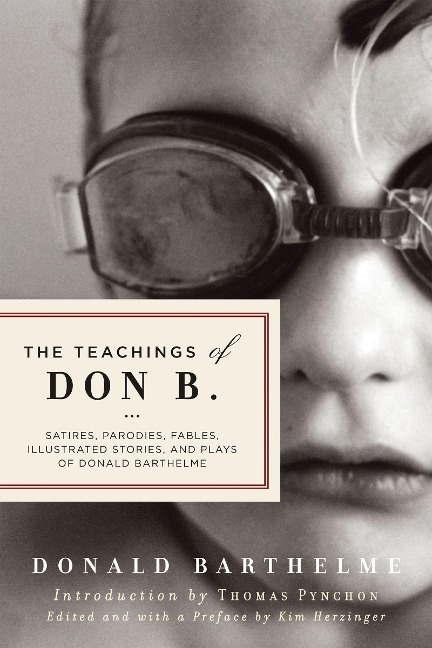 The Teachings of Don B.: Satires, Parodies, Fables, Illustrated Stories, and Plays

"Barthelme . . . happens to be one of a handful of American authors, there to make us look bad, who know instinctively how to stash the merchandise, bamboozle the inspectors, and smuggle their nocturnal contraband right on past the checkpoints of daylight 'reality.'" -Thomas Pynchon, from the Introduction

*A hypothetical episode of Batman hilariously slowed down to soap-opera speed.
*A game of baseball as played by T. S. Eliot and Willem "Big Bull" de Kooning.
*A recipe for feeding sixty pork-sotted celebrants at your daughter's wedding.
*An outlandishly illustrated account of a scientific quest for God.

"A small education in laughter, melancholy, and the English language." -The New York Times Book Review

"Barthelme, who died in 1989, was a distinctive master of fragments . . . Anger, wit, extravagant associations and disassociations; these would be less memorable if it were not for Barthelme's ability to evoke dreams and the tenderness with which he does it." -Los Angeles Times

DONALD BARTHELME is a winner of the National Book Award and is the author of over seventeen books, including Flying to America, City Life (one of Time Magazine's Best Books of the Year), and Sixty Stories, which was nominated for the National Book Critics Circle Award, the PEN/Faulkner Award, and the Los Angeles Times Book Prize. He was a founder of the renowned University of Houston Creative Writing Program, where he taught for many years. He died in 1989.

KIM HERZINGER is a critic and fiction writer, winner of a Pushcart Prize, and writer on minimalism and other contemporary literary phenomena. He edited most recently Flying to America: 45 More Stories. He teaches at the University of Southern Mississippi.