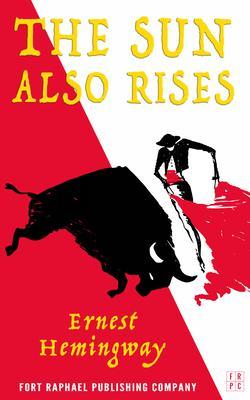 Ernest Hemingway's first novel, "The Sun Also Rises," follows the adventures of a group of young, hard-drinking, American expatriates - which Hemingway refers to as the "Lost Generation" - as they pinball through Europe, from France to Spain and back again. Directionless, disillusioned and fueled by copious amounts of alcohol, narrator Jake Barnes takes the reader into the heart of 1920's Europe, particularly Madrid and Pamplona, where the characters witness the infamous running of the bulls and Jake develops as fascination with bullfighting. At once cynical and satiric, "The Sun Also Rises" was the first cry of a new literary voice that would come to dominate the first half of the 20th century.

The seminal novel from Nobel Prize winner Ernest Hemingway, the book appears here in its unabridged and original format.

Ernest Hemingway (1899-1961) was one of the most influential writers and larger-than-life characters of the first half of the 20th Century. A renowned outdoorsman, journalist and, for a time, European expatriate, Hemingway began life as a reporter and his just-the-facts style of writing for newspapers - unadorned and direct - became the signature style he employed in his stories and novels.Born and raised in Oak Park, Illinois, Hemingway was rejected by the Army for poor eyesight and soon happened upon a Red Cross notice enticing young men to become ambulance drivers in Europe and immediately signed up.Shipped to the Italian Front in June of 1918, Hemingway would be seriously injured by mortar fire and hospitalized in Milan, where he fell in love with a Red Cross nurse. He would later use his wartime experience as the basis for his book "A Farewell to Arms."Working as a reporter in Paris, Hemingway fell in with a group artists who had taken up residence in the city, including James Joyce, Ezra Pound, Pablo Picasso, Gertrude Stein and F. Scott Fitzgerald. Fitzgerald's publication of "The Great Gatsby" convinced Hemingway that he should move on from writing short stories and embark on a novel.  His trip to Pamplona, Spain and subsequent fascination with bullfighting led to his creation of his first full book, "The Sun Also Rises."Hemingway is also known for his novels "To Have and Have Not,"  "For Whom the Bell Tolls" and "The Old Man and the Sea," as well as numerous short stories.  In 1954, Hemingway was awarded the Nobel Prize in Literature.  Hemingway's health and mental status began to rapidly deteriorate in the late 1950s and while he continued to write, his mental decline and physical challenges proved to be too much for him to bear. On July 2, 1961, Hemingway took up his favorite shotgun, put it to his head and ended his life.Ernest Hemingway was a dominant figure in American literature during his lifetime and his influence on the writers who followed him - both positive and negative - lasts to this day.