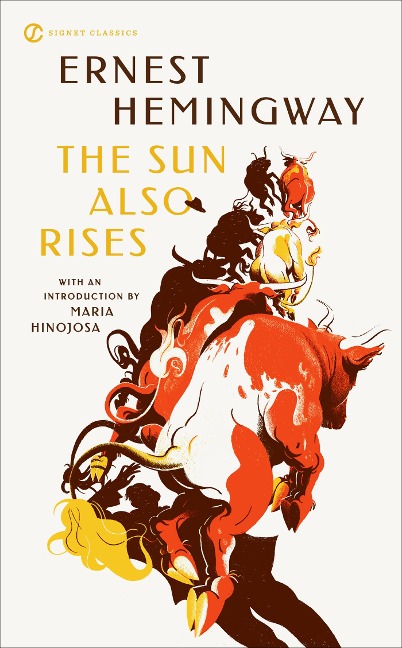 With a new introduction by Maria Hinojosa, Emmy Award-winning journalist and anchor of Latino USA

"A truly gripping story, told in a lean, hard, athletic narrative prose that puts more literary English to shame…It is magnificent writing, filled with that organic action which gives a compelling picture of character. This novel is unquestionably one of the events of an unusually rich year in literature."-New York Times Book Review

First published in 1926, The Sun Also Rises displays the full flower of Hemingway's unique style, at once spare and gut-wrenching. Following a group of expatriates in Europe after the devastation of World War I, the novel traces the doomed love story of Jake Barnes, a veteran wrestling with wounds both physical and emotional, and the beautiful Lady Brett Ashley. As they drift from the hedonistic nightlife of Paris to the macho world of bullfighting in Spain, these members of the Lost Generation face the loss of their illusions and the impossibility of love. Closely based on true people and events Hemingway experienced as an ex-pat in Europe, this debut novel marked the arrival of a towering talent.

Ernest Hemingway (1899-1961) was a Nobel Prize-winning American novelist and short-story writer. He was born and raised in Oak Park, Illinois, an affluent suburb of Chicago. The family summered in Northern Michigan, where he developed his life-long passion for hunting, fishing and the outdoors. He started his career as a writer for the Kansas City Star, but left for Italy after six months to enlist as an ambulance driver in World War I.  After being wounded by a mortar, he received the Silver Medal of Valor from the Italian Government and returned to the U.S., though he didn't stay long; he returned to Europe as an international reporter for Canadian and American newspapers, though his real ambition was to write fiction. He became part of an influential group of expatriate Americans and modernist writers living in Paris, including Gertrude Stein and James Joyce. His various experiences abroad-particularly his first Spanish bullfight and the festivals in Pamplona-informed his writing of The Sun Also Rises, published in 1926. Among his other notable works are A Farewell to Arms (1929), For Whom the Bell Tolls (1940), and The Old Man and the Sea (1952).

Maria Hinojosa's journalist credits include reporting for PBS, CBS, WGBH, WNBC, CNN, NPR, and anchoring and executive producing the Peabody Award-winning show Latino USA. She is a frequent guest on MSNBC and has won several awards, including four Emmys and the Walter Cronkite Award for Excellence in Journalism. In 2010, she founded Futuro Media, an independent nonprofit organization with the mission of producing multimedia content from a POC perspective. She is also the founding co-anchor of the political podcast In The Thick. She has written three books, including Once I Was You.