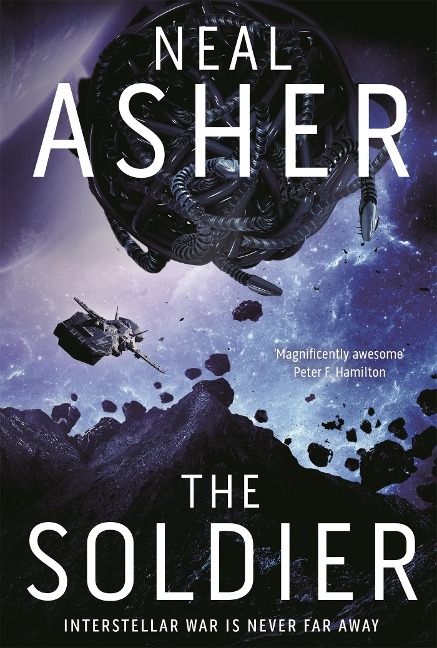 Her mission is vital
Her failure is unthinkable

A corner of space swarms with lethal technology, created by a long-dead race called the Jain. It's guarded by Orlandine, tasked with keeping it contained, or it could destroy entire civilizations. Dragon, an alien intelligence, shares her vigil, but she doesn't share everything with it . . . Orlandine plots to obliterate this swarm, for some will do anything to exploit it - including activating a Jain super-soldier. This could breach even Orlandine's defences.

Meanwhile, humanity and the alien prador empire also watch this sector of space, each blocking the other from claiming its power. However, things are about to change. The Jain might not be as dead as they seemed and interstellar war looms closer than ever.

'Post-humans scheme and struggle. Then Asher turns it up to eleven . . .'
Peter F. Hamilton

'Neal Asher's books are like an adrenaline shot'
John Scalzi

Neal Asher divides his time between Essex and Crete, mostly at a keyboard and mentally light-years away. His full-length novels are as follows. First is the Agent Cormac series: Gridlinked, The Line of Polity, Brass Man, Polity Agent and Line War. Next comes the Spatterjay series: The Skinner, The Voyage of the Sable Keech and Orbus. Also set in the same world of the Polity are these standalone novels: Hilldiggers, Prador Moon, Shadow of the Scorpion and The Technician. The Transformation trilogy is also based in the Polity: Dark Intelligence, War Factory and Infinity Engine. Set in a dystopian future are: The Departure, Zero Point and Jupiter War, while Cowl takes us across time. The Soldier, the first book in the Rise of the Jain series, returns to the Polity.