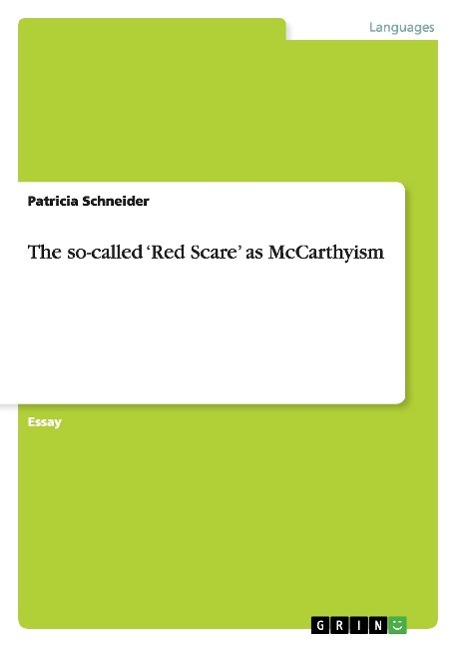 The so-called 'Red Scare' as McCarthyism

Essay from the year 2010 in the subject English - Applied Geography, grade: 1,3, University of Ulster, language: English, abstract: February 9, 1950, Wheeling, West Virginia: Joseph R. McCarthy, senator of Wisconsin, gives a speech at a meeting of the Republican Women's Club, claiming that he owns a list of 205 names of members of the Communist party who are employed in the State Department.  Although the number of the names changes with the place where the speech is given, the press is electrified by his claims and the senator soon personifies American anti-Communism.
In order to explain the circumstances under which it was possible to persecute and harass American citizens in the way McCarthy did after his speech had been successful, a closer look at the decades previous to McCarthy's appearance is necessary.
Therefore, this essay will first focus on the Red Scare of 1919-20, since it can serve 'both as an analogy and a legacy'  for the events to come.  Afterwards the 'little red scare' of the thirties will be examined, since anti-Communist sentiments aroused again under Franklin D Roosevelt's New Deal programme. During the 'little red scare', anti-Communism was rather a domestic issue. Therefore, it could easily be ended by the 2nd World War, since foreign affairs dominated American politics then. However, the following section will focus on the aftermath of the 2nd World War, since several events in America's foreign policy transferred the anti-Communist sentiments to being international concerns. Thus, the years directly preceding McCarthy's speech will be examined in detail.  Particular attention will be paid to McCarthy himself and the reasons for his success. Finally, the essay will conclude by answering the question whether or not it is accurate to describe the so-called 'Red Scare' as McCarthyism.