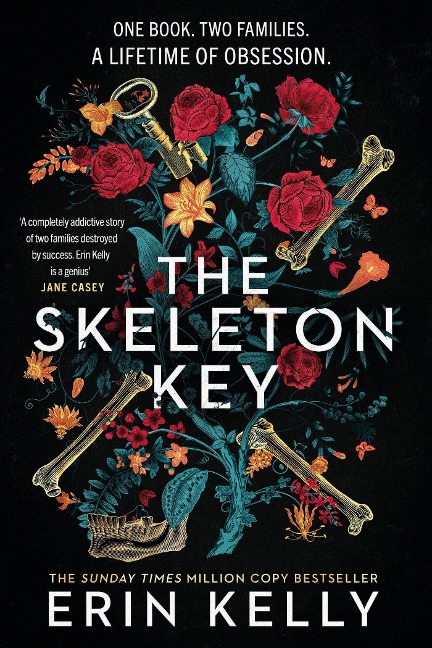 The brand-new unpredictable, tense and utterly gripping suspense from the million-copy bestselller

A reunion leads to tragedy, and the unravelling of dark family secrets . . .

It is the summer of 2021 and Nell has come home at her family's insistence to celebrate an anniversary. Her father, Sir Frank Churcher, is regarded as a cult figure by many. Fifty years ago he wrote The Golden Bones. Part picture book, part treasure hunt, it was a fairy story about Elinore, a murdered woman whose skeleton was scattered all over England. Clues and puzzles in the pages of The Golden Bones led readers to seven sites where jewels were buried - gold and precious stones, each a different part of a skeleton. One by one, the tiny golden bones were dug up until only Elinore's pelvis remained hidden. The book was a sensation. A community of treasure hunters called the Bonehunters formed, in frenzied competition, obsessed to a dangerous degree. People sold their homes to travel to England and search for Elinore. Marriages broke down as the quest consumed people. A man died. The book made Frank a rich man. And it ruined Nell's life.

But Sir Frank has reunited the Churchers for a very particular reason. The book is being reissued, along with a new treasure hunt and a documentary crew are charting the anniversary. Nell is appalled, and fearful. During the filming, Frank finally reveals the whereabouts of the missing golden bone. And then all hell breaks loose.

From the bestselling author of He Said/She Said and Watch Her Fall, this is a taut, mesmerising novel about a daughter haunted by her father's legacy . . .

Erin Kelly is the Sunday Times bestselling author of The Poison Tree, The Sick Rose, The Burning Air, The Ties That Bind, He Said/She Said, Stone Mothers/We Know You Know, Watch Her Fall and Broadchurch: The Novel, inspired by the mega-hit TV series. In 2013, The Poison Tree became a major ITV drama and was a Richard & Judy Summer Read in 2011. He Said/She Said spent six weeks in the top ten in both hardback and paperback, was longlisted for the Theakston's Old Peculier crime novel of the year award, and selected for both the Simon Mayo Radio 2 and Richard & Judy Book Clubs. She has worked as a freelance journalist since 1998 and written for the Guardian, The Sunday Times, Daily Mail, New Statesman, Red, Elle and Cosmopolitan. Born in London in 1976, she lives in north London with her husband and daughters. erinkelly.co.uk twitter.com/mserinkelly