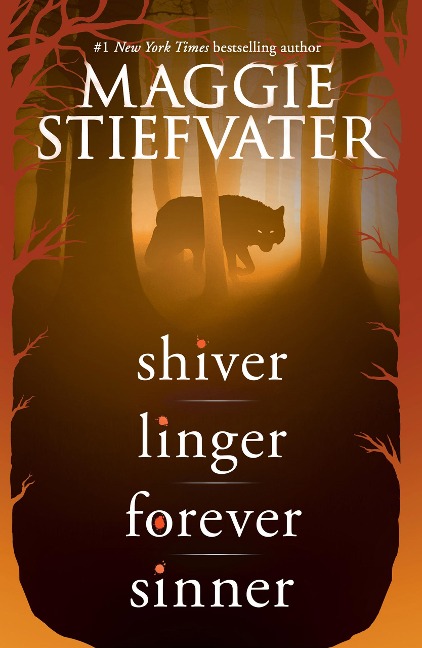 In Shiver, meet Sam. He's not just a normal boy-he has a secret. During the summer he walks and talks as a human, but when the cold comes, he runs with his pack as a wolf. Grace has spent years watching the wolves in the woods behind her house-but never dreamed that she would fall in love with one of them. Linger tells the story of Sam and Grace's struggle to stay together, and the dangerous secret Grace must keep from everyone, including her parents. In Forever, wolves are being hunted, which means the stakes are even higher for Grace and Sam and the wolf pack. With Sinner comes the long awaited story of Cole, a wolf wrestling with his own demons, and his attempt to win back Isabel Culper

For Grace, Sam, and Cole and Isabel, life is harrowing and euphoric, enticing and alarming. As their world falls apart, love is what lingers. But can it be enough?

Maggie Stiefvater is the #1 New York Times bestselling author of the novels Shiver, Linger, Forever, and Sinner. Her novel The Scorpio Races was named a Michael L. Printz Honor Book by the American Library Association. The first book in The Raven Cycle, The Raven Boys, was a Publishers Weekly Best Book of the Year and the second book, The Dream Thieves, was an ALA Best Book for Young Adults. The third book, Blue Lily, Lily Blue, received five starred reviews. The final book, The Raven King, received four. She is also the author of All the Crooked Saints and Call Down the Hawk. She is also an artist and musician. She lives in Virginia with her husband and their two children. You can visit her online at maggiestiefvater.com.