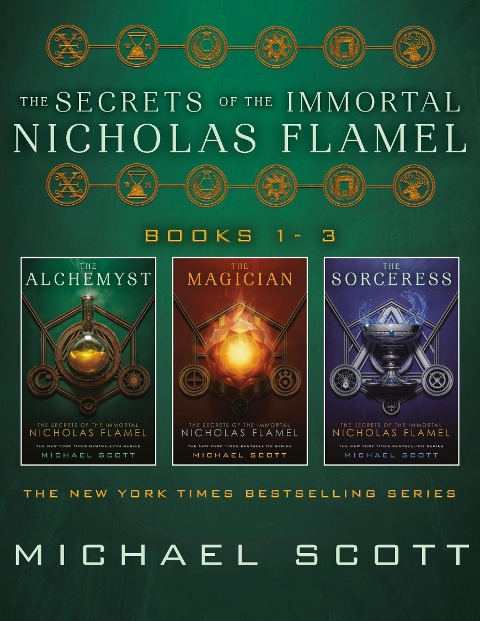 The Secrets of the Immortal Nicholas Flamel (Books 1-3)

The Alchemyst; The Magician; The Sorceress

Nicholas Flamel appeared in J.K. Rowling's Harry Potter-but did you know he really lived? And he might still be alive today! Discover the truth in Michael Scott's New York Times bestselling series the Secrets of the Immortal Nicholas Flamel with the first three books: The Alchemyst, The Magician, and The Sorceress.

The truth: Nicholas Flamel was born in Paris on September 28, 1330.

The legend: Nicholas Flamel discovered the secret of eternal life.

The records show that he died in 1418.
But his tomb is empty.
Nicholas Flamel lives. But only because he has been making the elixir of life for centuries.
The secret of eternal life is hidden within the book he protects-the   Book of Abraham the Mage. It's the most powerful book that has ever   existed. In the wrong hands, it will destroy the world. That's exactly   what Dr. John Dee plans to do when he steals it.
Humankind won't know   what's happening until it's too late. And if the prophecy is right,   Sophie and Josh Newman are the only ones with the power to save the   world as we know it.
Sometimes legends are true. And Sophie and   Josh Newman are about to find themselves in the middle of the greatest   legend of all time.

"[A] A riveting fantasy…While there   is plenty here to send readers rushing to their encyclopedias…those  who  read the book at face value will simply be caught up in the  enthralling  story. A fabulous read."-SLJ, Starred

Read the whole series! The Alchemyst
The Magician
The Sorceress
The Necromancer
The Warlock
The Enchantress

An authority on mythology and folklore, Michael Scott is one of Ireland's most successful authors. A master of fantasy, science fiction, horror, and folklore, he was hailed by the Irish Times as "the King of Fantasy in these isles." Look for the six books in his New York Times bestselling The Secrets of the Immortal Nicholas Flamel series: book one, The Alchemyst; book two, The Magician; book three, The Sorceress; book four, The Necromancer; book five, The Warlock; and book six, The Enchantress. You can visit Michael Scott at dillonscott.com and follow him on Facebook and Twitter.