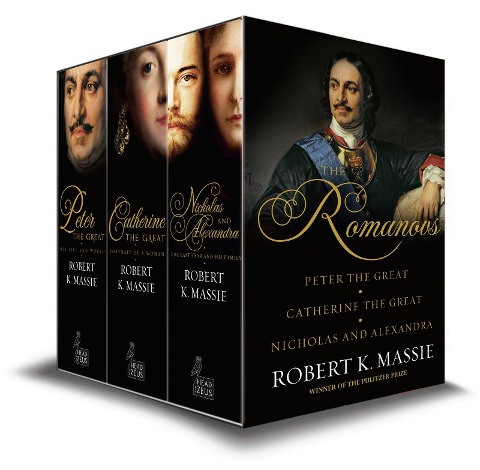 Peter the Great, Catherine the Great, Nicholas and Alexandra: The story of the Romanovs

Against a monumental backdrop of fabulous splendour, intrigue and barbaric cruelty, unfolds a powerful drama of passion and history. This is the story of the Romanovs, from the Tsar who brought Russia from darkness into light, to one of the greatest female rulers in history, and ultimately to the death-marked royals who watched their empire crumble.

PETER THE GREAT: Crowned at the age of 10, Peter embodied the greatest strengths and weaknesses of Russia while being at the very forefront of her development.

CATHERINE THE GREAT: In 1762, Catherine rode out of St Petersburg at the head of an army to arrest her husband. Three months later, at the age of just 33, she became sole empress of the largest empire on earth.

NICHOLAS AND ALEXANDRA: The story of Nicholas's political naivete, Alexandra's obsession with the corrupt mystic Rasputin, and little Alexis's brave struggle with haemophilia.

Robert K. Massie was born in Lexington, Kentucky, and studied American history at Yale and European history at Oxford, which he attended as a Rhodes Scholar. He was president of the Authors Guild from 1987 to 1991. His books include Peter the Great: His Life and World (for which he won a Pulitzer Prize for biography), Catherine the Great, Nicholas and Alexandra, Dreadnought: Britain, Germany, and the Coming of the Great War and Castles of Steel: Britain, Germany, and the Winning of the Great War at Sea.

The Inner Life of Animals