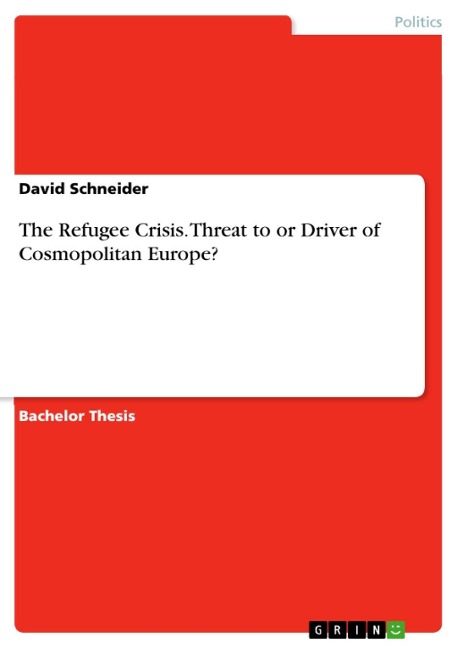 The Refugee Crisis. Threat to or Driver of Cosmopolitan Europe?

Bachelor Thesis from the year 2016 in the subject Politics - Political Theory and the History of Ideas Journal, grade: 1,0, University of Tubingen (Global Ethic Institute), course: Ethics in International Relations, language: English, abstract: It is the year 2016, and the Refugee Crisis is omnipresent in the media, public debates as well as in politics. The ethical challenge of refugees is being discussed even in university seminars. The topic is drawing big attention not in one European Union (EU) member state but across the entire EU. The discourse is not homogeneous-neither at the national nor the civil society level.

The reactions range from wholehearted welcoming of asylum-seekers by governments and individuals to hostile, xenophobic counter-movements. What? Xenophobic movements? But, haven't quite a few scholars, Seyla Benhabib and Ulrich Beck among them, alluded to connections between the EU and cosmopolitanism? Why then are some member states rejecting refugees instead of welcoming them hospitably like they should do as cosmopolitan actors?

This confusion leads to the following question: Is the Refugee Crisis a threat to, or could it be, in contrast, also be a driver of cosmopolitan Europe? This question has not been investigated in academia until now and shall be outlined in this paper. Research done in the fields of philosophy, sociology, political science, and law discusses certain aspects of the question this paper poses and will be put together to solve the puzzle.

Graduate student at the London School of Economics and Political Science