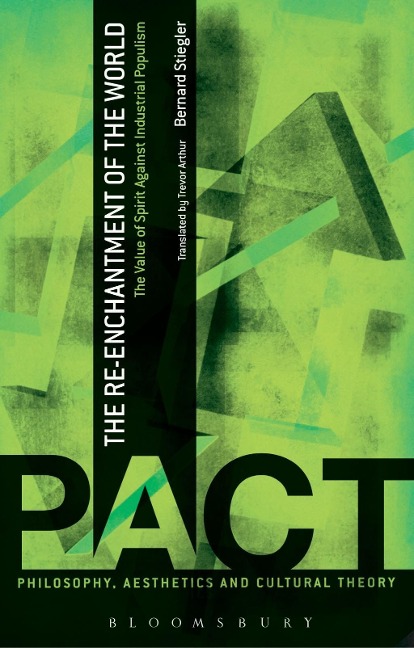 The Re-Enchantment of the World

The Value of Spirit Against Industrial Populism

Bernard Stiegler's work on the intimate relations between the human and the technical have made him one of the most important voices to have emerged in French philosophy in the last decade. At the same time both an accessible summation of that work and a continuation of it, The Re-Enchantment of the World advances a critique of consumer capitalism that draws on Freud and Marx to construct an utterly contemporary analysis of our time. The book explores the cognitive, affective, social and economic effects of the 'proletarianization' of the consumer in late capitalism and the resulting destruction of the consumer's savoir-vivre. Reflecting the collective work of his activist organisation, Ars Industrialis, Stiegler here sets forth an alternative path to that of 'industrial populism', one that appeals to the force of the human spirit.

The Re-Enchantment of the World also includes the manifesto of Ars Industrialis and an account of the organisation's 2005 summit in Tunis.

Bernard Stiegler is Director of the Institute of Research and Development at the Georges Pompidou Center, France and Associated Professor at Goldsmiths College, University of London, UK. He is the author of a prolific and growing body of work, including the three volume Technics and Time.

Introduction: What is to be done?
Manifesto of ... Ars Industrialis
Part I: Refounding Society
1. The Industrial Age as Service Capitalism
2. The Consumer Discharged of his Existence
3. Hyperindustrial Service Societies as the Destruction of Individuation by Controlling Adoption Procedures
4. Re-Enchanting the World in the Face of the Unhappy Destiny of Consumption
5. 'R' Technologies and the New Apparatuses of Spirit
6. Overcoming the Capitalism of Drives and Fighting Against its Becoming-Barbaric
7. Startled, We Begin Again Differently (!) / The Sudden Surge: a Nw Beginning
8. Grammatization and Individuation - Yesterday, Today and Tomorrow
9. The Revolution of Capitalism
10. A European Way of Life
11. The Plan that Enchants Me
Part II: Investing in the Augmentation of the Value of the 'Human Spirit' Against the Reign of Ignorance
12. From the Informatization of Society to "Information Society"
13. From the "Information Society" to the "Society of Knowledge" - or, On the Possibility of the Re-Enchantment of the World
14. Companies, Public Power, and Industrial Populism
15. Changing the Industrial Paradigm
16. Information Society, Disenchantment, De-Motivation and Control of Knowledge
17. The Re-Instrumentation of Knowledge, the Future of Hyperindustrial Society
18. Knowledge and Information
19. Knowledge and Memory, or Reign of Ignorance?
20. The Risk of Disindividuation as the Growth of Ignorance Rather Than Knowledge
21. Cognitive Saturation and Knowledge Management
22. Instruments of Knowledge and the Criteria of Selection That They Produce
23. Being and Becoming in Technoscience
24. The Crisis of Education
25. Practical Consequences
Motion adopted by Ars Industrial on the eve of the Tunis summit
Bibliography
Index