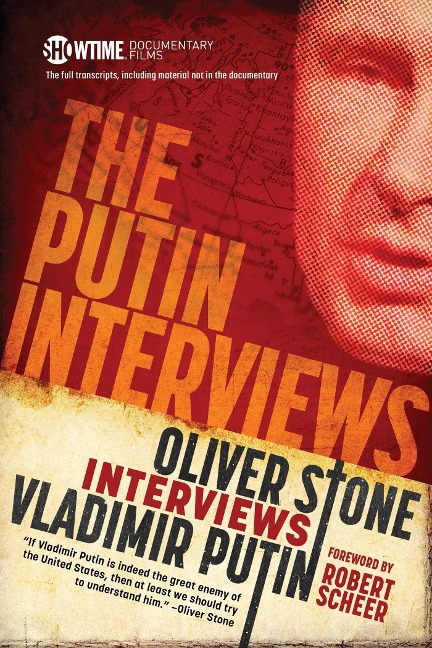 From Oscar-winner Oliver Stone comes a first-hand look at one of the most important, powerful, and controversial leaders in the world: Vladimir Putin of Russia. The companion to the news-breaking television series, this edition has substantial material not included in the documentary.

The Putin Interviews are culled from more than a dozen interviews with Putin over a two-year span—never before has the Russian leader spoken in such depth or at such length with a Western interviewer. No topics are off limits in the interviews, which first occurred during Stone’s trips to meet with NSA whistleblower Edward Snowden in Moscow and most recently after the election of President Donald Trump.

Prodded by Stone, Putin discusses relations between the United States and Russia, allegations of interference in the US election, and Russia’s involvement with conflicts in Syria, Ukraine, and elsewhere across the globe. Putin speaks about his rise to power and details his relationships with Presidents Clinton, George W. Bush, Obama, and Trump. The exchanges are personal, provocative, and at times surreal. At one point, Stone asks, “Why did Russia hack the election?”; at another, Stone introduces him to Stanley Kubrick’s 1964 Cold War satire "Dr. Strangelove," which the two watch together.

Stone has interviewed controversial world leaders before, including Hugo Chavez, Fidel Castro, and Benjamin Netanyahu. But The Putin Interviews, in its unmediated access to one of the most enigmatic and powerful men in the world, can only be compared to the series of conversations between David Frost and Richard Nixon we now refer to as “The Nixon Interviews” of 1977.

The book will also contain references and sources that give readers a deeper understanding of the topics covered in the interviews and make for a more robust reading experience.

Academy Award-winning Oliver Stone has written and directed over 25 feature films and 6 documentaries, among them some of the most influential and iconic films of the last decades. Some have been at deep odds with conventional myth—films such as Platoon, Born on the Fourth of July, JFK, Natural Born Killers, Nixon, and Untold History of the United States.