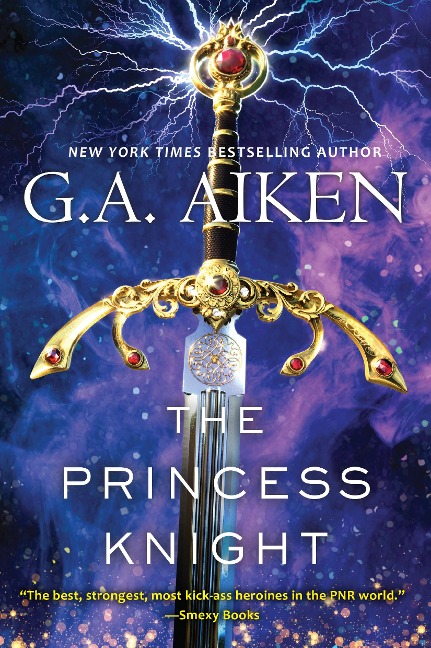 USA Today Bestseller
An Amazon Best of the Month Selection

In New York Times bestselling author G.A. Aiken's gripping new fantasy romance series, the Blacksmith Queen must confront armies and pretenders desperate to take her new-won crown. But with the Princess Knight at her side and a centaur warrior clan at her back, she'll risk everything for victory . . .

Gemma Smythe dedicated her life to the glory of battle. With her fellow War Monks, she worshipped the war gods, rained destruction on her enemies, and raised the dead when the fancy took her. Until her sister Keeley became the prophesied Blacksmith Queen, and Gemma broke faith with her order to journey to the Amichai Mountain and fight by Keeley's side.

The Amichai warriors are an unruly, never-to-be-tamed lot, especially their leader-in-waiting, Quinn. But when the War Monks declare support for Gemma's ruthless younger sister Beatrix, the immaturity of her key ally is the least of Gemma's problems. She has to get to the grand masters, dispel their grudge against her, and persuade them to fight for Keeley and justice. If her conviction can't sway them, perhaps Quinn's irritating, irreverent, clearly unhinged, ferocity will win the day . . .

Praise for The Blacksmith Queen

"It may be laugh-out-loud funny, but at its heart this is a story of a woman who cares deeply for both the family she has and the one she creates."
-Bookpage

"Tilting more toward fantasy, this paranormal romance will be a hit with fans of both genres who enjoy tales that are lighthearted and humorous."
-Booklist