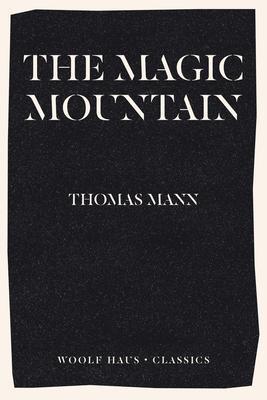 "The Magic Mountain is simply one of the greatest novels ever written." - The Guardian

With this dizzyingly rich novel of ideas, Thomas Mann rose to the front ranks of the great modern novelists, winning the Nobel Prize for Literature in 1929. The Magic Mountain takes place in an exclusive tuberculosis sanatorium in the Swiss Alps - a community devoted to sickness that serves as a fictional microcosm for Europe in the days before the First World War. To this hermetic and otherworldly realm comes Hans Castorp, an "ordinary young man" who arrives for a short visit and ends up staying for seven years, during which he succumbs both to the lure of eros and to the intoxication of ideas.

"Mann was a master of this genre, in private life as in his fiction." - The London Review of Books

"In Mann's work the historic and contemporary retains its outsideness. He is a Wagnerian spellbinder, a mythmaker, but the myth always refers back to the real world." - The New York Review of Books

"Mann's sense of vulnerability modifies his temptation to abstraction; his awareness of the tawdry and shameful humanizes his concentration on the very act of art. He is saved by the perverse, by the knowledge that comes from having looked at the lost. For this his greatness, threatened by its own energy, still inspires awe and love." - The New York Times

"The Magic Mountain taught me that big ideas have vitality, that intellectual life could make for great storytelling, and that the map of an age could be found in the personalities of the people who lived it, lessons that I carried into the writing of history. But the truth is, I have returned again and again to The Magic Mountain because the characters who inhabit it are such delightful company." - The American Scholar

"[The Magic Mountain] is one of those works that changed the shape and possibilities of European literature. It is a masterwork, unlike any other. It is also, if we learn to read it on its own terms, a delight, comic and profound, a new form of language, a new way of seeing." - A. S. Byatt

"Long acclaimed as a masterly synthesis of the intellectual history of early 20th-century Europe and for its prescient scrutiny of elements in the German national character that had, and would again, find expression in the calamitous form of the world war." - Kirkus

"The greatest German novelist of the 20th century" - Spectator

"Mann is Germany's outstanding modern classic, a decadent representative of the tradition of Goethe and Schiller. With his famous irony, he was up there with Schopenhauer, Nietzsche and Freud, holding together the modern world with a love of art and imagination to compensate for the emptiness left by social and religious collapse." - Independent

"Mann's real masterpiece is his sprawling snowbound epic of 1924, The Magic Mountain ... The entire work is suffused with a sly and gentle humour, making it an absolute delight to read ... A book I return to every couple of years, The Magic Mountain is simply one of the greatest novels ever written." - The Guardian