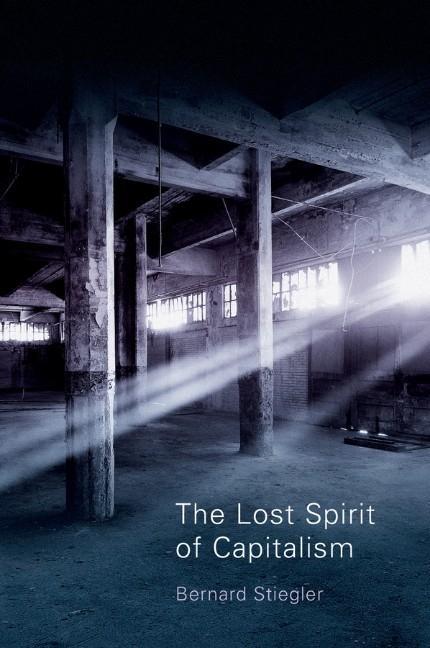 The Lost Spirit of Capitalism: Disbelief and Discredit

In this important book Bernard Stiegler takes a very different view: what we are witnessing today is not the triumph of the spirit of capitalism but rather its demise, as our contemporary 'hyper-industrial' societies become increasingly uncontrollable, profoundly irrational and incapable of inspiring hope. Disenchantment and despair have become the everyday lived experiences of countless individuals. Far from being a moment of liberation, May '68 was just the first symptom of our increasing disenchantment and 'spiritual misery'. The libidinal energy that originally underpinned capitalism has become an unbound force, unleashing drives that can no longer be contained.

Is there an alternative? Stiegler argues that the development of alternatives must begin with a new industrial policy, designed to recognize that technologies are what Plato called pharmaka, meaning both poison and cure. Industrial society has a future only if we can create technologies that foster relations of care (otium) for people whose spirit has been exhausted by contemporary consumerism. We must develop an ecology not only to protect the planet but also to renew the exploited energies of human desire.

This volume - the third in a trilogy that includes The Decadence of Industrial Democracies and Uncontrollable Societies of Disaffected Individuals - will consolidate Stiegler's reputation as one of the most original philosophers and cultural theorists of our time.

6. 'Artistic critique' and 'social critique', or the jargon of authenticity
7. The recuperation of the 'ideas of '68' by French capitalism and the establishment of control society
8. Digression on the meteorological predictions of the Alaskan Eskimo
9. False problems concerning action
10. Authenticity and singularity: fantasy and the forgetting of what does not exist
11. Supports and relations of production

II. The automatization of the super-ego and the passage of desire as original diversion of libidinal energy

12. The historicity of psychoanalytic categories and the illusion of desire as a natural state
13. From psychopathology to sociopathology
14. Contradictions between Marcuse's Marxism and his Freudianism in relation to struggle (eris) against the risk of decomposition. Moving beyond guilt
15. Technics, super-ego and desublimation
16. Processes of adoption and diversions of libido: Marcuse and the tendency of libidinal energy to fall
17. 'Liberation of instincts', technesis and the passage of desire ? the thrust of the knife
18. The murder of the father, the opening of time and guilt, and 'the instant of my death henceforth always pending'
19. Diversions and decompositions
20. The automatization of the super-ego
21. The opposition of Narcissus and Prometheus
22. Ontology and the reality principle
23. Libidinal ecology

24. Intoxications, prohibitions, cares
25. The struggle for the life of the spirit
26. Consistence of the health and authority of public power: the freedom of the spirit