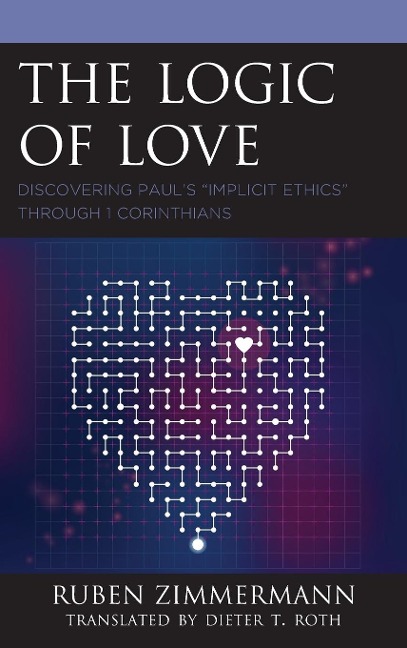 The Logic of Love

The goal of the present study unfolds in the following four ways. First, in analyzing Pauline writings (primarily Paul's First Letter to the Corinthians) it can be demonstrated that the Apostle can be described as an ethicist. The hypothesis operative here is that in the sources, despite their occasional and situational character and their epistolary form, one can recognize a coherent system of grounds for behavior (i.e., ethics). I call this recognizable ethics "implicit ethics."
Secondly, this work pursues an explicit ethical interpretation of Paul's writings. What does it mean to read these texts through an ethical lens? I here offer an approach with which one can decipher the ethical content of a historical text. This methodology for ethical analysis (so called 'organon') is not only applicable to Paul's writings, but can also provide an impetus for the ethical interpretation of other NT texts and even for the literature of early Christianity and the Bible more generally.
The variety of forms and the complexity of the reflection in Paul's letters can, in a third point, enrich the discourse of theological ethics. It will be seen, that the rationale for his ethics is pluralistic and simply cannot be described in a one-sided manner as simply being a "deontological ethics of norms."
Along these lines, a fourth element is found in stimulating interdisciplinary debates concerning ethics. If one is able to examine and describe the norms and grounds of justification in Biblical ethics using the language and forms of description utilized in modern ethical theory, biblical ethics could once again gain a voice that can be taken seriously in the modern discussion of values. The point is not to have Scripture per se join the discussion but for these texts to function as a "laboratory" (Paul Ricoeur) in which ethical speech and thought relevant for contemporary concerns can be inspired and encouraged. In a concluding chapter this dialogue is already started by describing specific aspects of Pauline ethics against the background or moral philosophical debate, e.g. "bodily ethics - beyond hedonism", "ethics of relinquishing - beyond contractual ethics" or "ethics of love beyond Eudaimonian ethics".