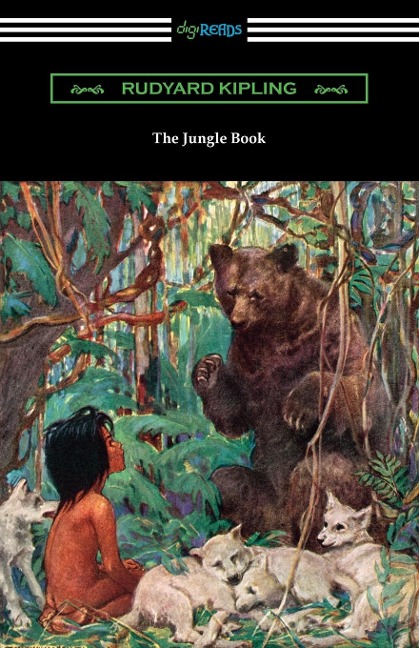 First published serially between 1893 and 1894, "The Jungle Book" is Rudyard Kipling's classic collection of jungle tales in which we first meet Mowgli, a child lost in the jungles of India and raised by a pack of wolves. To survive in the jungle Mowgli most learn from the animals to abide by the laws of the jungle. A cast of interesting creatures surround Mowgli, including Baloo the bear and Bagheera the black panther, who help the young man to survive, and the tiger Shere Khan, who is envious of Mowgli and wishes his demise. Also contained in this collection are the stories of Kotick, a white seal in search of a new home for his tribe were they will not be hunted, and Rikki-Tikki-Tavi, a mongoose who defends an Indian family against a pair of cobras. Several other tales of the jungle grace this collection which is interspersed with beautiful poetry relating to the stories. One of the most popular collections of short stories for children ever written, "The Jungle Book" was inspired by Kipling's own experiences as a youth in India, where he would spend many of his formative years. This edition is printed on premium acid-free paper.