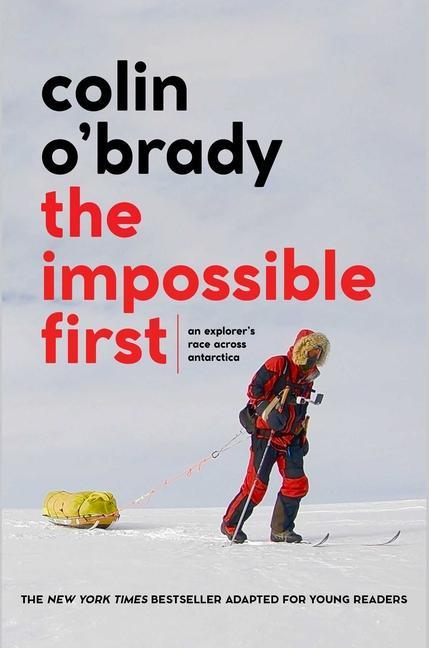 The Impossible First-Young Readers Edition: An Explorer's Race Across Antarctica

In this Young Readers Edition of Impossible First—perfect for fans of My Shot by Elena Delle Donne and Shaken by Tim Tebow—Colin O'Brady vividly recounts his fifty-four-day, unsupported, record-shattering solo crossing of Antarctica using every ounce of his strength, years of training, and sheer force of will.

Prior to December 2018, no individual had ever crossed the landmass of Antarctica alone, without support, and completely human-powered. But Colin O'Brady was determined to do just that—even though ten years earlier a tragic accident raised doubts that he'd ever walk again normally.

O'Brady's quest drew him into a head-to-head battle with British SAS Captain Louis Rudd—also striving to be "the first." Enduring Antarctica's sub-zero temperatures and pulling a sled that initially weighed 375 pounds in complete isolation and through a succession of whiteouts, storms, and a series of near disasters, O'Brady journeyed 932 miles to a world first. Honest, deeply moving, filled with moments of vulnerability—and set against the backdrop of some of the most extreme environments on earth, from Mount Everest to Antarctica—The Impossible First reveals how anyone can reject limits, overcome immense obstacles, and discover what matters most.

Colin O'Brady is a ten-time world record breaking explorer, New York Times bestselling author, entrepreneur, speaker, and an expert on mindset. His mission: using his hard-won wisdom to encourage others to step outside of their comfort zone and unlock their best lives. Colin's highly publicized expeditions have been seen by millions and his work has been featured in The New York Times and Forbes and on The Tonight Show, the BBC, The Joe Rogan Experience, and Today.  His feats include the world's first solo, unsupported, and fully human-powered crossing of Antarctica, speed records for the Explorers Grand Slam and the Seven Summits, and the first human-powered row across Drake Passage. He regularly speaks at Fortune 100 companies such as Nike, Google, and Amazon and at top universities such as UPenn, Georgetown, and Johns Hopkins. Native to the Pacific Northwest, he now lives in Jackson Hole, Wyoming, with his wife, Jenna Besaw, and dog, Jack. Engage with Colin and his work on social media @ColinOBrady or at ColinOBrady.com.