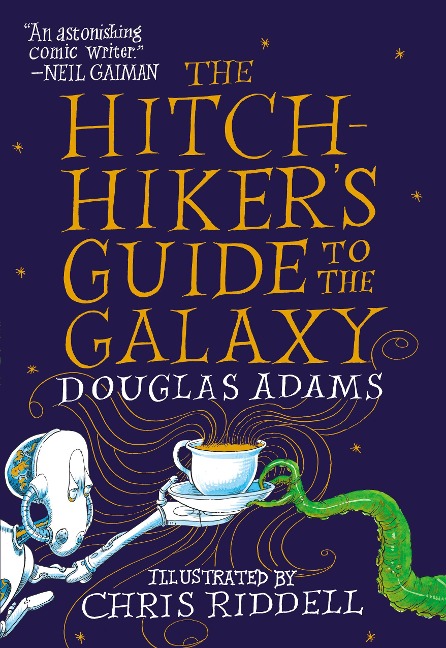 The Hitchhiker's Guide to the Galaxy: The Illustrated Edition

SOON TO BE A HULU SERIES • Now celebrating the pivotal 42nd anniversary of the original radio show on which the book was based.

Seconds before Earth is demolished to make way for a galactic freeway, Arthur Dent is plucked off the planet by his friend Ford Prefect, a researcher for the revised edition of The Hitchhiker's Guide to the Galaxy who, for the last fifteen years, has been posing as an out-of-work actor.

Together, this dynamic pair began a journey through space aided by a galaxyful of fellow travelers: Zaphod Beeblebrox-the two-headed, three-armed ex-hippie and totally out-to-lunch president of the galaxy; Trillian (formerly Tricia McMillan), Zaphod's girlfriend, whom Arthur tried to pick up at a cocktail party once upon a time zone; Marvin, a paranoid, brilliant, and chronically depressed robot; and Veet Voojagig, a former graduate student obsessed with the disappearance of all the ballpoint pens he's bought over the years.

Where are these pens? Why are we born? Why do we die? For all the answers, stick your thumb to the stars!

Praise for The Hitchhiker's Guide to the Galaxy

"A whimsical oddyssey . . . Characters frolic through the galaxy with infectious joy."-Publishers Weekly

Douglas Adams was born in 1952 and created all the various and contradictory manifestations of The Hitchhiker's Guide to the Galaxy: radio, novels, TV, computer games, stage adaptations, comic book, and bath towel. He was born in Cambridge and lived with his wife and daughter in Islington, London, before moving to Santa Barbara, California, where he died suddenly in 2001.

Chris Riddell, the 2015-2017 UK Children's Laureate, is an accomplished artist and the political cartoonist for the Observer. He has enjoyed great acclaim for his books for children. He has won a number of major prizes, including the 2001, 2004, and 2016 CILIP Kate Greenaway Medals. His book Goth Girl and the Ghost of a Mouse won the Costa Children's Book Award 2014. Riddell has been honored with an OBE in recognition of his illustration and charity work. He lives in Brighton with his family.

Not a Drop to Drink