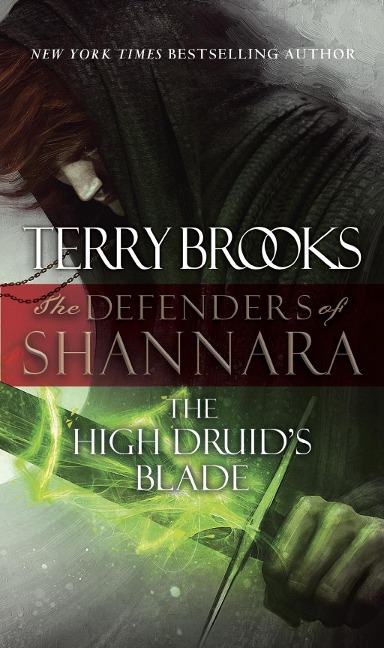 The Defenders of Shannara

Legend has it that Paxon Leah is descended from the royals and warriors who once ruled the Highlands and waged war with magical weapons. But those kings, queens, and heroes are long gone, and there is nothing enchanted about the antique sword that hangs above Paxon's fireplace. Running his family's modest shipping business, Paxon leads a quiet life-until extraordinary circumstances overturn his simple world . . . and rewrite his destiny.

When his brash young sister is abducted by a menacing stranger, Paxon races to her rescue with the only weapon he can find. And in a harrowing duel, he is stunned to discover powerful magic unleashed within him-and within his ancestors' ancient blade. But his formidable new ability is dangerous in untrained hands, and Paxon must master it quickly because his nearly fatal clash with the dark sorcerer Arcannen won't be his last. Leaving behind home and hearth, he journeys to the keep of the fabled Druid order to learn the secrets of magic and earn the right to become their sworn protector.

But treachery is afoot deep in the Druids' ranks. And the blackest of sorcery is twisting a helpless innocent into a murderous agent of evil. To halt an insidious plot that threatens not only the Druid order but all the Four Lands, Paxon Leah must summon the profound magic in his blood and the legendary mettle of his elders in the battle fate has chosen him to fight.

BONUS: This edition includes an excerpt from Terry Brooks's The Darkling Child.

Praise for The High Druid's Blade

"High adventure, lots of action, and appealing [characters] . . . a good place for new readers to jump into the author's world."-Library Journal

"Terry Brooks is a grandmaster of the fantasy genre, and his latest will both captivate and surprise readers. . . . It's truly magical."-Associated Press

"Brooks once again gifts readers with a breathless adventure in this new Shannara trilogy, the Defenders of Shannara. The action begins in the first chapter and doesn't end until the last page."-RT Book Reviews

"A great place to introduce yourself to all of Brooks's novels . . . [The High Druid's Blade] is a great stand-alone book and will definitely throw you headfirst into the world of Shannara."-Whedonopolis

"The High Druid's Blade is an intriguing, action-filled novel that you are sure to love."-Faire's Fair Book Reviews

"An enjoyable read . . . I will definitely be picking up the next book when it comes out."-Jessie Reads Everything

"If Tolkien is the grandfather of modern fantasy, Terry Brooks is its favorite uncle."-Peter V. Brett, New York Times bestselling author of The Desert Spear

"I can't even begin to count how many of Terry Brooks's books I've read (and reread) over the years. From Shannara to Landover, his work was a huge part of my childhood."-Patrick Rothfuss, New York Times bestselling author of The Name of the Wind

Terry Brooks has thrilled readers for decades with his powers of imagination and storytelling. He is the author of more than thirty books, most of which have been New York Times bestsellers. He lives with his wife, Judine, in the Pacific Northwest.