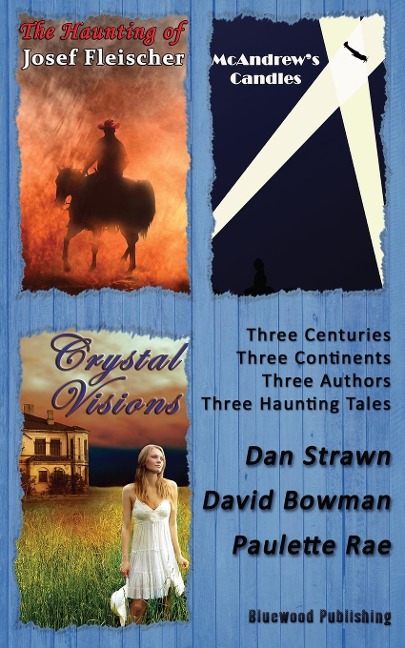 The Haunting of Josef Fleischer by Dan Strawn
Josef Fleischer's ideal life is turned upside down when dreams and visions begin to haunt his nights. At first, they are specters of waging war-him, his father and those other Oregon volunteers who fought the Indians on the Palouse back in '54. Josef thought he had put all this behind him decades ago-the war, the killing, Yellow Bird, and the warrior. But when the warrior appears in a daytime vision, promising that Yellow Bird will be avenged, Josef resolves to face his demons. Is he going mad, or has a real warrior ghost come to deliver revenge?

McAndrew's Candles by David Bowman
Lieutenant McAndrew found his cushy posting to Hampstead Heath in charge of a searchlight battery was anything but the soft posting he'd anticipated in the summer of 1942. There again, having lost his arm at Dunkirk, it was the only kind of contribution he could make to the war effort.
The battery had had a pretty good war, but for some reason, one of his searchlight crews wasn't performing to the same standard. They were sloppy and not as quick to react when the bombers came over. There was also that troubling disciplinary matter his predecessor had swept under the carpet.
One way or another, Lieutenant McAndrew intends to get to the bottom of why one of his searchlight crews isn't up to the standard of the others.

Crystal Visions by Paulette Rae
Although secretly impressed by their new home, Crystal is still mad her father uprooted her from the city, leaving behind friends and precious memories of her mother.
She finds solace in new neighbours, but when bad dreams continue to plague her nights, Crystal learns that the family who sold them the house left somebody behind.
Why does Daniel's spirit linger? Can Crystal help him find peace enough to move on?