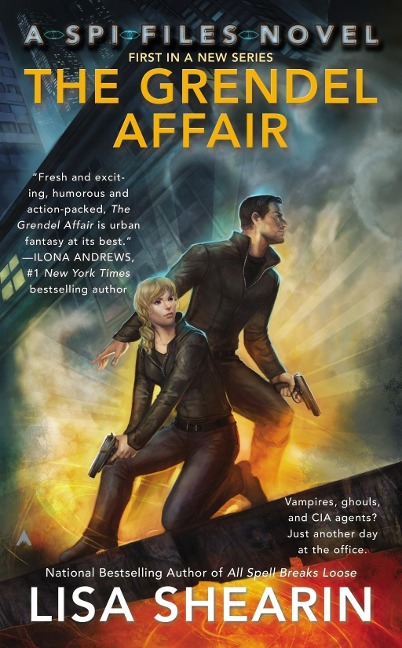 We're Supernatural Protection & Investigations, known as SPI. Things that go bump in the night, the monsters you thought didn't exist? We battle them and keep you safe. But some supernatural baddies are just too big to contain, even for us...

When I moved to New York to become a world famous journalist, I never imagined that snagging a job at a seedy tabloid would change my career path from trashy reporter to undercover agent. I'm Makenna Fraser, a Seer for SPI. I can see through any disguise, shield, or spell that a paranormal pest can come up with. I track down creatures and my partner, Ian Byrne, takes them out.

Our cases are generally pretty routine, but a sickle-wielding serial killer has been prowling the city's subway tunnels. And the murderer's not human. The fiend in question, a descendant of Grendel—yes, that Grendel—shares his ancestor's hatred of parties, revelry, and drunkards. And with New Year's Eve in Times Square only two days away, we need to bag him quickly. Because if we don't find him—and the organization behind him—by midnight, our secret's out and everyone's time is up.

FIRST IN A NEW SERIES

Lisa Shearin currently works as the editor at an advertising agency.  She has been a magazine editor and writer of corporate marketing materials of every description.  Lisa enjoys singing, reading, writing novels, and fencing (foil and epee, as well as rapier & dagger dueling).  She lives in North Carolina with her husband, two cats, two spoiled-rotten retired racing greyhounds, and a Jack Russell terrier who rules them all.

She is the author of Magic Lost, Trouble Found, Armed & Magical, The Trouble with Demons, Bewitched & Betrayed, Con & Conjure, and All Spell Breaks Loose.