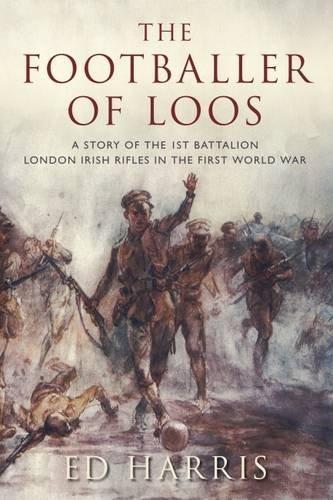 The Footballer of Loos

The Germans fighting on two fronts were concentrating in the east where the Russians were weakening. In the west, the Allied effort was met with well prepared German defences, and efforts to open a new front on the Gallipoli Peninsula had foundered. Decisive action to break the deadlock on the Western Front saw a mighty attack of six British divisions planned for the autumn of 1915 in the vicinity of the small mining community of Loos en Gohelle where 'The Big Push' would begin.     The bitter recriminations that followed the perceived failure reduced the Battle of Loos to a footnote in the history of the Great War for many decades. Entirely lost in translation has been the Boys' Own tale of the Tommy who kicked a football ahead of the charge. That soldier was identified as Rifleman Frank Edwards, and through his original research, Ed Harris clearly establishes for the first time that the first great attack by the British army was begun when Edwards kicked a football towards the German lines. Harris sheds light on what it was like to be a part of this crucial battle and questions the largely held view that Loos was a failure, using material sourced from a wide variety of sources form the Imperial War Museum to the National Football Museum.