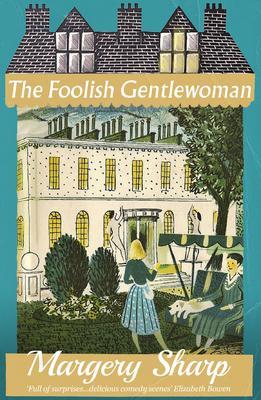 Sentimental, affectionate, uncritical, Mrs. Bracken so easily attached herself to persons, places, and even objects that after no more than two days in an hotel she had a favourite waiter, a favourite ornament, a favourite view. She had adored her husband, and was very fond of her French pepper-mill.

World War II has ended and widowed Isabel Brocken, kind-hearted and generous if perhaps just a bit foolish, is back in her old family home on the outskirts of London, accompanied by her friend Jacky, just out of the ATS, and her newly-demobilized nephew Humphrey. They're soon joined by Isabel's surly brother-in-law Simon, who has decidedly mixed feelings about her but whose own home is under repair for bomb damage. Into this uneasy mix comes Tilly Cuff, a poor relation to whom Isabel has been inspired-by a rare church venture and a particularly inspiring sermon-to make amends for having, many years before, sabotaged her one chance at romance.

When Tilly proves manipulative and even 'malevolent', the happiness of Isabel's household is threatened. And where the story goes from there is pure unexpected delight. In The Foolish Gentlewoman, Margery Sharp provides us a thoughtful, funny, and terrifically entertaining slice of British life in the immediate aftermath of war.

'Miss Margery Sharp has a sure-fire way of telling a story and a genius for writing dialogue - crisp, in the comic vein, yet able to carry the shadow of deeper feeling.' Elizabeth Bowen

Margery Sharp was born Clara Margery Melita Sharp in 1905 in Wiltshire. She spent some of her childhood in Malta, and on the family's return to England became a pupil at Streatham Hill High School.
She later studied at Bedford College, London, where she claimed her time was devoted 'almost entirely to journalism and campus activities.'
Still living in London, she began her writing career at the age of twenty-one, becoming a contributor of fiction and non-fiction to many of the most notable periodicals of the time in both Britain and America.
In 1938 she married Major Geoffrey Castle, an aeronautical engineer. On the outbreak of World War II, she served as a busy Army Education Lecturer, but continued her own writing both during and long after the conflict. Many of her stories for adults became the basis for Hollywood movie screenplays, in addition to the 'Miss Bianca' children's series, animated by Disney as The Rescuers in 1977.
Margery Sharp ultimately wrote 22 novels for adults (not 26, as is sometimes reported), as well as numerous stories and novellas (many of them published only in periodicals) and various works for children. She died in Suffolk in 1991, one year after her husband.