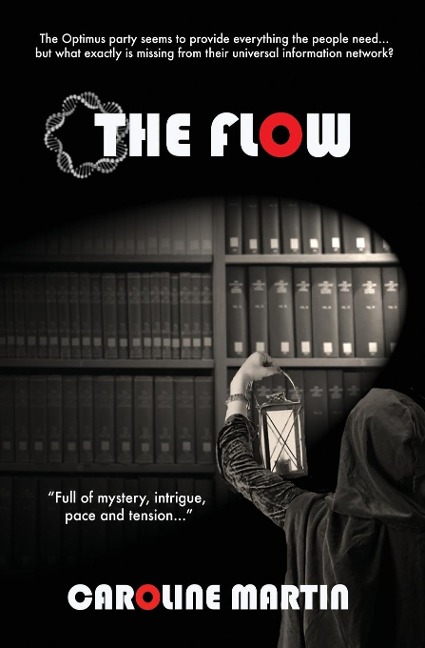 The Flow' is coming of age story wrapped up in a mystery. It follows a 14 year-old girl, Lexi Drachmann, as she investigates what exactly the ruling elite that control her life are keeping from the population and discovers how their actions threaten everyone's lives when an epidemic hits the city.
The Optimas Party took control of Britain in a landslide election victory following a series of scandals involving traditional political parties. Their leader is a charismatic preacher called Nathaniel Jefferies and his beliefs are soon introduced to the people via his 'churches' known as Sacellums. Scientists are imprisoned as alchemists, books are burned and traditional media is all shut down. Information is now provided to the public by the Party's internet-like system called The Flow. Punishments for law breaking are severe, and every aspect of social interaction is carefully controlled. The population however, seem simply relieved that the anarchy is over.
Lexi is a normal teenager who spends her time hanging out with her friends, listening to music or watching movies on The Flow. She's always accepted the restrictions on her life. But everything begins to change when her best friend, Tish, is 'Allocated' in an arranged marriage to an unknown boy called Lukas Svoboda.
Still reeling from the announcement of the Allocation, Lexi is spotted by an underground group seeking out disaffected individuals. Brother Ben and his associates have noticed that information on The Flow is not constant; that supposed facts can alter over time. They ask Lexi to help them investigate. Initially suspicious, Lexi is persuaded to help when the Authorities reacts oppressively to the outbreak of a mystery illness. And when the group begin digging, they discover that a whole world of information is being kept from the public.
During the search for the missing facts, Lexi gets to know Lukas. Their investigations take them directly to the local Optimas Party leader, Felix Canter (Tish's father). Trapped in his study, Lexi makes a shocking discovery as to how the population is being controlled. Then she and Lukas locate a secret bookstore under the Bodleian (Library) Flow-reading Rooms. In the dead of night, the two of them read about scientific ideas that have been completely eradicated from everyday life; starting with Charles Darwin's work on evolution and ending with how DNA can be used to produce vaccines against infectious diseases. As people continue to die, Lexi realises that the last of these is vitally important in beating the epidemic.
While the local Pastor demands increased prayer sessions to appease The Creator, Lexi and Lukas know that a vaccine originally developed by Lexi's imprisoned father can save everyone. Having located it in an abandoned hospital, Lexi uses what she has learned about the politicians to make sure the population gets vaccinated. But as she confronts her best friend's father about her discoveries and her own family history, he forces her to consider how her best friend's husband-to-be now feels about her… and in turn how she feels about him.

Caroline studies Natural Sciences at Cambridge University and Epidemiology at the London School of Hygiene and Tropical Medicine. She finds all science fascinating and hopes that by writing books with real world scientific issues at their care, she will inspire young people to take an interest in it too.