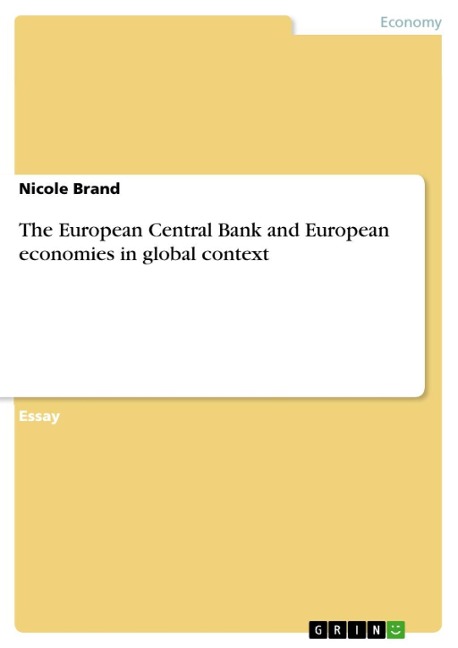 The European Central Bank and European economies in global context

Essay from the year 2005 in the subject Economics - Monetary theory and policy, grade: First class (72%), University of East London, 43 entries in the bibliography, language: English, abstract: In January 1999 eleven countries of the European Union locked their foreign exchange rate to the Euro and committed themselves to annul their own currency in favour of the Euro in the year 2000 (Bradley S and Whittaker J, 2000, Industrial Relations Journal, 31, 4, 261). Of particular interest and complexity are the relationships between countries within the euro zone and other economies worldwide. The relationship between the European economies and the European Central Bank (ECB) and its consequences in global context is a central issue in this report. Therefore, the previous research about the ECB has concentrated on its influence towards European and other global economies. The members of the current euro zone are: France, Germany, Italy, Austria, Belgium, Finland, Greece, Luxembourg, the Netherlands, Portugal and Spain. Apart from this, Denmark, Sweden and the United Kingdom are members of the European Union, which have not adopted the euro yet. These three countries are European economies even when they play another role in global context because of their own currency: British Pound, Danish Krone and Swedish Krona. Accordingly, the remainder of this paper is divided into four sections, reasons for establishing the ECB and its objectives, how decisions of the ECB concerning the interest rate may influence economies worldwide, a briefly annotation of advantages and disadvantages for members of the euro zone and a conclusion including a short outlook.