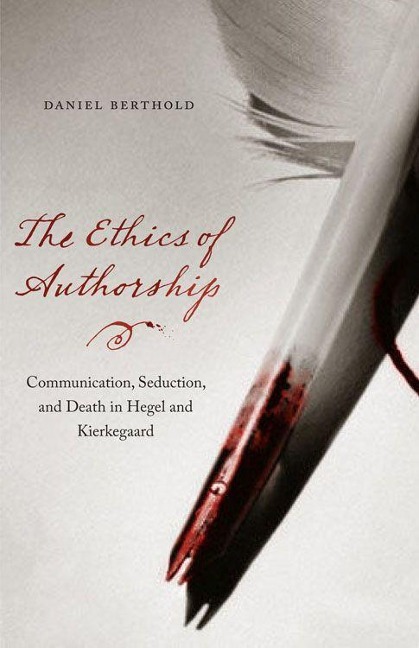 The Ethics of Authorship: Communication, Seduction, and Death in Hegel and Kierkegaard

This is a book about the ethics of authorship. Most directly, it explores different conceptualizations of the responsibilities of the author to the reader. But it also engages the question of what styles of authorship allow these responsibilities to be met. Style itself is an ethical issue, since the relation between the writing subject and the reader--and the dynamics of authority and influence, of gift giving and friendship in this relation--have as much to do with how one writes as what one says.

The two writers who serve as the main subjects for this work, the German idealist philosopher G. W. F. Hegel and the Danish Christian existentialist Søren Kierkegaard, invite us to confront particularly challenging questions about the ethics of authorship. Each in his own way explores styles of authorship that employ a variety of strategies of seduction in order to entice the reader into his narratives, strategies that at least on the surface appear to be fundamentally manipulative and unethical. Further, both seek to enact their own deaths as authors, effectively disappearing as reliable guides for the reader. That might also seem to be ethically irresponsible, an abandonment of the reader, who has been seduced only to be deserted.

This is the first work to undertake a sustained questioning of Kierkegaard's central distinction between his own "indirect" style of communication and the (purportedly) "direct" style of Hegel's philosophy. Hegel was in fact a much more subtle practitioner of style than Kierkegaard represents him as being, indeed, a practitioner whose style is in the service of an ambitious reconceptualization of the ethics of authorship. As for Kierkegaard, his own indirect style raises a whole series of ethical questions about how the reader is imagined in relation to the author.

There is finally an either/or between Hegel and Kierkegaard, just not the one Kierkegaard proposes as between an author devoid of ethics and one who makes possible a true ethics of authorship. Rather, the either/or is between two competing practices of authorship, one daunting with the cadences of a highly technical style, the other delightful for its elegance and playfulness--but both powerful experiments in the ethics of style.

Daniel Berthold is Chair of the Department of Philosophy at Bard College. His previous books are Hegel's Theory of Madness and Hegel's Grand Synthesis.