The Emperor on the Battlefield: Napoleon's Worth as a Military Commander – Felix Christoph Lotzin | buch7 – Der soziale Buchhandel
Bitte warten ... 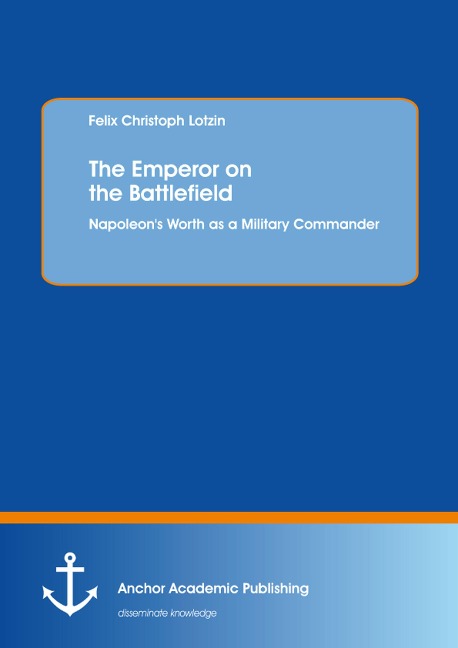 The Emperor on the Battlefield: Napoleon's Worth as a Military Commander

This book seeks to explore two working hypotheses: Firstly, that Napoleon's alleged military superiority in terms of skill and battlefield competence over his peers can be empirically quantified and proven. Secondly, that the results of Napoleonic warfare can be predicted by applying the theory of Contest Success Functions to these battles.
To address these claims this book is organized into four sections:
Theory:
The first of the conceptual sections summarizes the theoretical underpinning behind the economical understanding of conflict. This so called 'second approach' and its merits are outlined and the history of these theoretical concepts is explained. Chapter three introduces the Ratio Contest Success Function (RCSF) put forth by Tullock and the Difference Contest Success Function (DCSF) employed by Hirshleifer, the concepts for predicting probabilities of success in conflict theory.
History:
The fourth chapter gives a brief report on warfare during the Napoleonic ages. A special emphasis lies on an analysis that evaluates if the key parameters have been homogenous over the time and what kind of technology was employed during these battles. The results are then compared with the demands of conflict theory. The fifth chapter then explicates the data set. The different variables that could be obtained are introduced and at last the scope of the further analysis is specified. This is done by picking the variables that can actually be used for an in-depth quantitative.
Modelling:
In the four chapters that deal with the actual modelling, the theory is applied to the historical data to yield the results we need to verify the working hypotheses. After the two different estimators used have been introduced in chapter six, the chapters seven and eight deal with utilising each of the estimators to answer these questions. The results from the estimates are interpreted and are compared in chapter nine. In addition, chapter nine attempts to weigh the explanatory value of the two approaches and places them in the historical perspective.
Résumé:
Chapter ten answers comments on Napoleon's personal worth on the battlefield and applies the findings of the empirical work to three short case studies. The subsequent summary then merges the results of the whole study and concludes with follow-up questions for future research.

Oberleutnant Diplom-Volkswirt Felix Christoph Lotzin was born in Hamburg in 1985. After his Vordiplom in Volkwirtschaftslehre at the University of Mannheim in 2006, he joined the army.Having completed his studies in Volkwirtschaftslehre, Politikwissenschaft and Geschichtswissenschaft at the Helmut-Schmidt-University in 2010, he is now a Diplom-Volkswirt. His already in early times formed fascination with the historical period of the liberation wars inspired him to calculate Napoleons military abilities utilizing econometric methods.