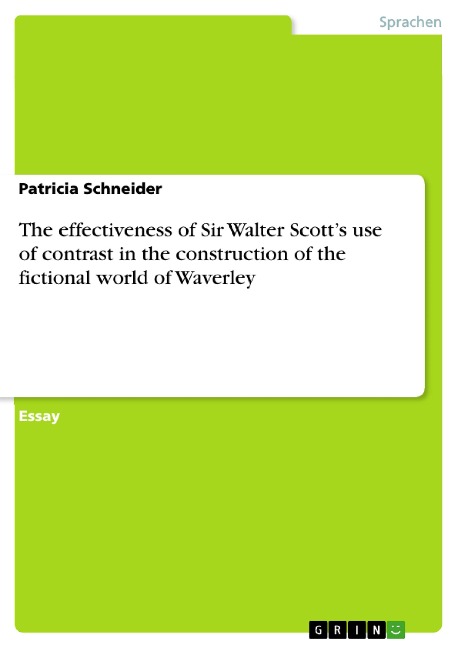 Essay aus dem Jahr 2011 im Fachbereich Didaktik - Englisch - Landeskunde, Note: 1,0, University of Ulster, Sprache: Deutsch, Abstract: In the opinion of Robin Mayhead, one of the quintessential aspects of the literary method of Sir Walter Scott is its 'bringing together of incongruously disparate worlds'. This statement is to be examined on the example of his first novel Waverley in the following essay, by proving its truth in several aspects. First of all, Scott's use of contrast in the novel's plot will be observed, since there are two plots to be found in Waverley, which develop on different scales but which are still unified. Afterwards, the focus of interest will be the fictional world surrounding the protagonist. In this section, contrasting pairs of characters will be examined. Particular attention will be paid to the setting since its contrasting features underline symbolically the characters' oppositions. Moreover, the contrasts between England and Scotland will be of interest. After having studied the contrasts displayed in the fictional world itself, the focus will be on the narrator. Finally, the essay will conclude by considering the literary context in which the novel was written and the 'disparate worlds' that influenced Scott's writing.