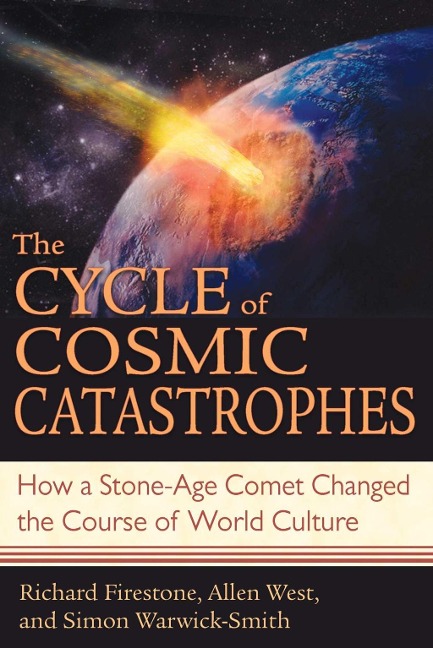 The Cycle of Cosmic Catastrophes

How a Stone-Age Comet Changed the Course of World Culture

There are a number of puzzling mysteries in the history of Earth that have yet to be satisfactorily explained by mainstream science: the extinction of the dinosaurs, the vanishing of ancient Indian tribes, the formation of the mysterious Carolina Bays, the disappearance of the mammoths, the sudden ending of the last Ice Age, and the cause of huge underwater landslides that sent massive tsunamis racing across the oceans millennia ago. Eyewitness accounts of these events are chronicled in rich oral traditions handed down through generations of native peoples. The authors' recent scientific discoveries link all these events to a single cause.

In The Cycle of Cosmic Catastrophes Richard Firestone, Allen West, and Simon Warwick-Smith present new scientific evidence about a series of prehistoric cosmic events that explains why the last Ice Age ended so abruptly. Their findings validate the ubiquitous legends and myths of floods, fires, and weather extremes passed down by our ancestors and show how these legendary events relate to each other. Their findings also support the idea that we are entering a thousand-year cycle of increasing danger and possibly a new cycle of extinctions.

Richard Firestone holds a Ph.D. in nuclear chemistry and has been part of the Isotopes Project at Lawrence Berkeley National Laboratory since 1979.

PART ONE: THE SEARCH
1. The Search for Clues
2. "Bullets" in the Dirt
3. Mammoth under the Black Mat
4. Hunting Mammoths
5. Bright Yellow Bones
6. To Clovis from Czechoslovakia
7. The Horse and the Clovis Spear
8. The Mystery of the Drumlins
9. Out on a Limb in Carolina
10. The Mystery of the Carolina Bays

PART THREE: THE EVIDENCE
12. Scientists and Storytellers
13. The Ominous "Guest Stars"
14. Explosions in the Sky
15. Giant Bubbles in Space
16. Radiation from the Heavens
17. The Carolina Bay Craters
18. The Martian Connection
19. The Main Craters
20. Bays on the High Plains
21. Streaks across the Plains
22. Earth, the Radiation Detector
23.  Supernova 41,000 BP
24. Solar System Impact
25. Chemistry of the Comet
26. Crater below Lake Michigan
27. Moment of Impact
28.  Possible Canadian Impact Craters
29. Impacts on Other Continents
30. Fires across the Land
31. Fast-Moving Ice and Water
32. The Waters Cover the Land
33. Endless Waves
34. Diamonds from the Sky
35. Wrapping it Up

Appendix A. Find Your Own Stardust
Appendix B. Chemistry of the Comet
Appendix C. Lakes with Firestorm Charcoal
Appendix D. Key Clovis-era Markers