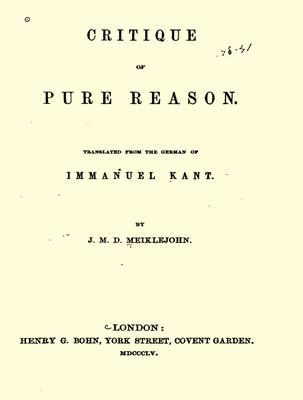 The Critique of Pure Reason

The Critique of Pure Reason is a book by the German philosopher Immanuel Kant, in which the author seeks to determine the limits and scope of metaphysics. Also referred to as Kant's "First Critique", it was followed by the Critique of Practical Reason and the Critique of Judgment.

Immanuel Kant was an influential German philosopher in the Age of Enlightenment. In his doctrine of transcendental idealism, he argued that space, time, and causation are mere sensibilities; "things-in-themselves" exist, but their nature is unknowable.

The Hundredth House Had No Walls