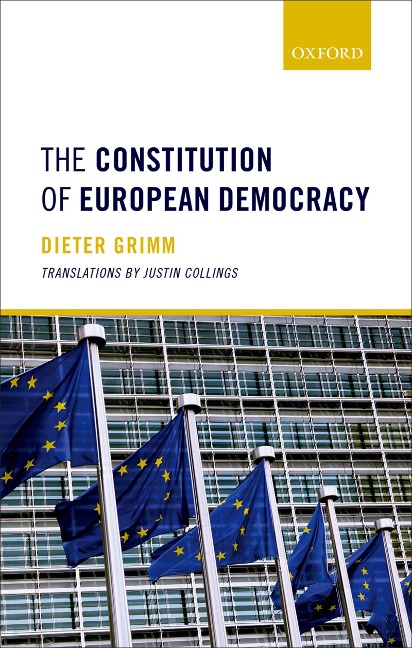 The Constitution of European Democracy

Europe is in crisis. With rising unrest among citizens of EU member states exemplified by the UK's decision to leave the EU, and the growing popularity of anti-EU political parties, Dieter Grimm presents the argument that Europe has to change its method of further integration or risks failure. This book, containing essays many of which have not been published in the English language to date, explores how the EU has become over-constitutionalized.  Grimm argues that
this has left the EU with a democratic deficit leading to the alienation of citizens.

This book highlights Europe's democracy problem. The most prominent argument running throughout is that the EU and its decision-making processes have become over-constitutionalized. This is due to the constitutionalization of European treaties, which has occurred by raising them to the eminence of a constitution as a result of the jurisprudence of the European Court of Justice. However, the treaties contain provisions that would be ordinary law in member states. The fact that they enjoy
constitutional status in Europe detaches them from the democratic processes in the member states and the EU itself, and contributes to the growing independence of the EU's executive and judicial institutions.

The book also asserts that currently the EU does not have enough sources of legitimation to uphold itself, surviving solely on the legitimation provided by member states. One popular remedy is the suggestion of 'parliamentarization' of the EU, giving the European Parliament the powers typically possessed by national parliaments as a means of heightening its legitimation. This is criticized by Grimm as expanding the Parliament's powers would not change the effects of over-constiutionalization as
the Parliament is inferior to the constitution.

In order to reduce the EU's legitimacy deficit, Grimm makes several recommendations. The repoliticization of the decision-making processes, which can be achieved by reducing treaties to the capacity necessary for their constitutional function; the reinvigoration of European Parliament elections, by having 'Europeanized' parties to increase engagement with European society and give voters the opportunity to more immediately influence European politics; and a new division of powers based on
subject matter to restrain European expansionism, reserving particular areas of policy to the responsibility of member states even if this affects the common market.

Dieter Grimm teaches constitutional law at Humboldt University Berlin and the Yale Law School. From 1987-1999 he served as Justice of the Federal Constitutional Court of Germany. From 2001-2007 he was the Director of the Wissenschaftskolleg zu Berlin (Institute for Advanced Study) whose Permanent Fellow he continues to be. He was Visiting Professor at Harvard, New York University, Toronto, Rome, Kolkata, Seoul, Beijing, Shanghai and a Fellow of the Stellenbosch
Institute for Advanced Study in South Africa. He is a member of the Berlin-Brandenburgische Akademie der Wissenschaften, the Academia Europaea and the American Academy of Arts and Sciences. He holds honorary doctoral degrees from the universities of Toronto, Göttingen, Porto Alegre, and Bucarest. He has
widely published on matters of constitutional law, constitutional history, constitutional theory, comparative constitutionalism, and European Union law.

Your Brain at Work

You and Your Teenager