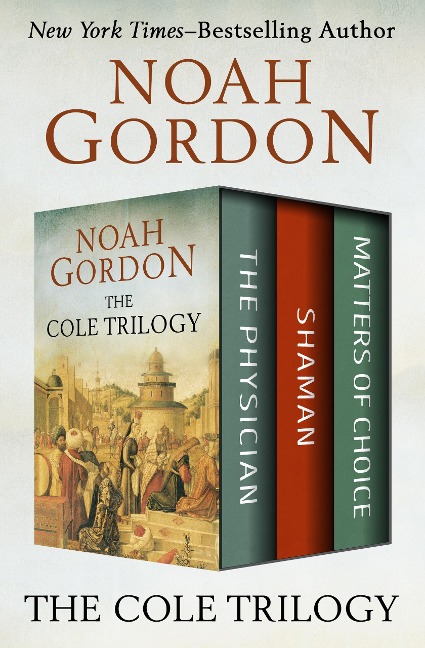 The Physician, Shaman, and Matters of Choice

The New York Times-bestselling author's historical saga of a family of healers-from Dark Ages London to Civil War America to modern-day Boston.
In The Physician, an orphan in eleventh-century London, Robert Cole, becomes a fast-talking swindler. As he matures, his strange gift-an acute sensitivity to impending death-never leaves him, and he yearns to become a healer. Arab madrassas are the only authentic medical schools, and he makes his perilous way to Persia. Christians are barred from Muslim schools, but by claiming he is a Jew, he studies under the world's most renowned physician, Avicenna. Cole's journey and love for a woman who must struggle against her only rival-medicine-make The Physician a riveting modern classic.
In Shaman, Dr. Robert Judson Cole, nineteenth-century descendent of the first Robert Cole, travels from his ravaged Scottish homeland, through the operating rooms of antebellum Boston, to the cabins of frontier Illinois. In the wilderness he befriends the starving remnants of the Sauk tribe, who have fled their reservation. In the process, he absorbs their culture and learns native remedies that enrich his classical medical education. He marries a remarkable settler woman he had saved from illness. The Cole family is drawn into the bloody vortex of the Civil War, and their determination to survive in the midst of wilderness and violence will stay with the reader long after the final page.
In Matters of Choice, Roberta Jeanne d'Arc Cole is the latest first-born descendant of Dr. Robert Cole. Favored to be named associate chief of medicine at a Boston hospital, she is married to a surgeon and owns a trophy residence in Cambridge as well as a summer house. But everything melts away. Her gender and her work at an abortion clinic cost her the hospital appointment. Her marriage fails. Crushed, she goes to her farmhouse in western Massachusetts, thinking to sell it, and finds an unexpected life. How she continues to fight for every woman's right to choose, while acknowledging her own ticking clock and maternal yearning, makes this prize-winning third story of the Cole trilogy relevant and unforgettable.
E-Book 09/2012

Noah Gordon's international bestsellers have sold millions of copies and have won a number of awards, among them, in America, the James Fenimore Cooper Prize for historical fiction. He lives outside of Boston with his wife, Lorraine Gordon.

Rescue of Business in Europe

Your Captivating Love (The Bennett Family, #2)

How To Be Parisian wherever you are