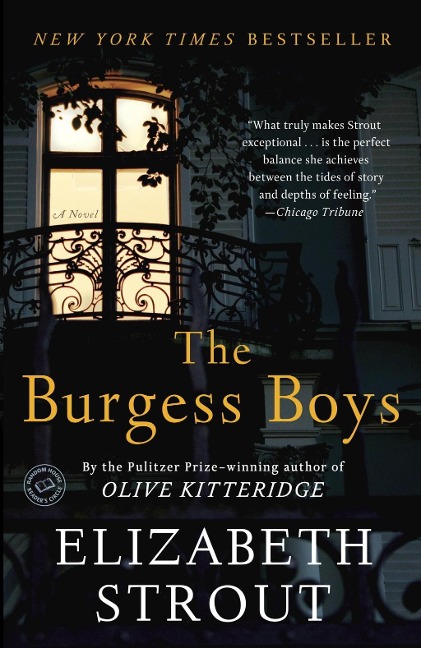 Elizabeth Strout "animates the ordinary with an astonishing force," wrote The New Yorker on the publication of her Pulitzer Prize-winning Olive Kitteridge. The San Francisco Chronicle praised Strout's "magnificent gift for humanizing characters." Now the acclaimed author returns with a stunning novel as powerful and moving as any work in contemporary literature.

Haunted by the freak accident that killed their father when they were children, Jim and Bob Burgess escaped from their Maine hometown of Shirley Falls for New York City as soon as they possibly could. Jim, a sleek, successful corporate lawyer, has belittled his bighearted brother their whole lives, and Bob, a Legal Aid attorney who idolizes Jim, has always taken it in stride. But their long-standing dynamic is upended when their sister, Susan-the Burgess sibling who stayed behind-urgently calls them home. Her lonely teenage son, Zach, has gotten himself into a world of trouble, and Susan desperately needs their help. And so the Burgess brothers return to the landscape of their childhood, where the long-buried tensions that have shaped and shadowed their relationship begin to surface in unexpected ways that will change them forever.

With a rare combination of brilliant storytelling, exquisite prose, and remarkable insight into character, Elizabeth Strout has brought to life two deeply human protagonists whose struggles and triumphs will resonate with readers long after they turn the final page. Tender, tough-minded, loving, and deeply illuminating about the ties that bind us to family and home, The Burgess Boys is Elizabeth Strout's newest and perhaps most astonishing work of literary art.

Praise for The Burgess Boys

"What truly makes Strout exceptional . . . is the perfect balance she achieves between the tides of story and depths of feeling."-Chicago Tribune

"Elizabeth Strout's first two books, Abide with Me and Amy and Isabelle, were highly thought of, and her third, Olive Kitteridge, won the Pulitzer Prize in fiction. But The Burgess Boys, her most recent novel, is her best yet."-The Boston Globe

Elizabeth Strout is the #1 New York Times bestselling author of Olive Kitteridge, winner of the Pulitzer Prize; Olive, Again, an Oprah's Book Club pick; Anything Is Possible, winner of the Story Prize; My Name is Lucy Barton, longlisted for the Man Booker Prize; The Burgess Boys, named one of the best books of the year by The Washington Post and NPR; Abide with Me, a national bestseller; and Amy and Isabelle, winner of the Los Angeles Times Art Seidenbaum Award for First Fiction and the Chicago Tribune Heartland Prize. She has also been a finalist for the National Book Critics Circle Award, the PEN/Faulkner Award for Fiction, the International Dublin Literary Award, and the Orange Prize. Her short stories have been published in a number of magazines, including The New Yorker and O: The Oprah Magazine. Elizabeth Strout lives in New York City.