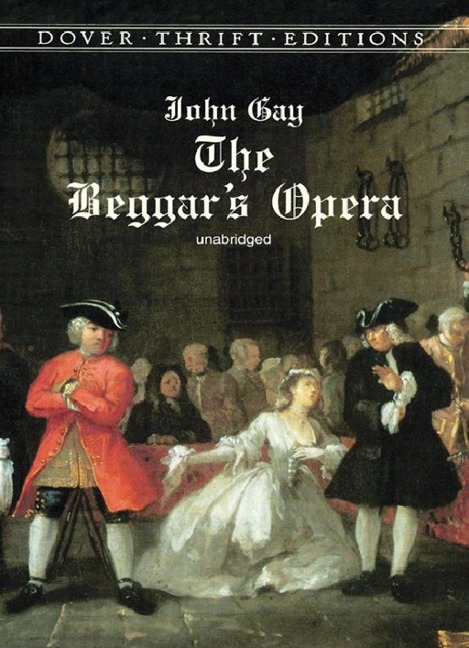 The great lords and powerful public officials of early 18th century England are represented as highwaymen and thieves in this deliciously satirical ballad opera. In addition to its burlesque of the contemporary vogue for Italian operatic styles, John Gay's 1728 masterpiece ridicules a broad spectrum of political figures and social conventions — marriage, lawyers, trade, and even Walpole, the prime minister. Depicting crime and vice at every level of society, The Beggar's Opera offers a witty and powerful indictment of greed, hypocrisy, and corruption in all social classes. When Peachum, a receiver of stolen goods, discovers that a notorious highwayman has eloped with his daughter, the wily old villain turns informer and collects the reward money as his prospective son-in-law is hauled off to prison. Events take an increasingly absurd turn as the dashing outlaw romances the jailer's daughter and effects an escape, only to return to the shadow of the gallows for a farcical climax that parodies the sentimental tragedy of the day.
The Beggar's Opera is in the satirical tradition of Swift and Pope. Its enduring relevance was recognized two centuries later by Bertolt Brecht and Kurt Weill, who used it as the basis for their landmark musical, The Threepenny Opera. This attractive, inexpensive edition of an influential comic gem will be applauded by theater lovers, students of literature and history, and other readers.
E-Book 11/2012